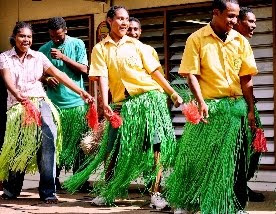 IT was a fun-filled day yesterday for Hohola youth development centre in Port Moresby as students staged various activities to mark the feast day of their founder St John Baptist de La Salle, The National reports.

And the heat of the sun could not damper the students spirits as they celebrated.

The day began with a talent show display along with a formation of the La Sallian star.

Two groups were selected from a list of performances that were showcased yesterday to establish two finalists to perform today.

The feast day will be hosted at Don BoscoTechnical Institute today with performances from Isidora and Extreme.

St John dedicated much of his life for the education of poor children of France in the 1680s and is considered the founder of the first Catholic schools.