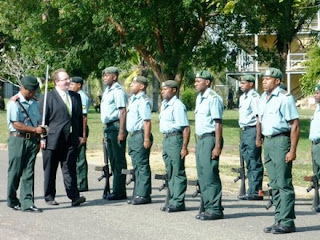 The programme with PNG is Australia’s largest with any country and has a budget allocation of $10.5 million (around PNGK25 million) for the 2011 financial year.

“Australia and PNG have a longstanding close friendship which is reflected in the co-operation between our two countries on a range of defence matters, from strategic planning to joint exercises.

“We will continue to build on our defence activities together in the spirit of mateship which has been a hallmark of our relationship since the shared sacrifices during World War II,” Senator Feeney said.

Australia works with the PNGDF on a range of activities including infrastructure development, maritime and border security.

The PNGDF and the Australian Defence Force conduct training and exercises together, including Exercise WANTOK WARRIOR which includes infantry, engineering, rotary wing and logistic elements.

Senator Feeney laid a wreath during PNG’s Remembrance Day Memorial Service at Ela Beach on Saturday and presented commemorative medallions to 13 “Fuzzy Wuzzy Angels” and their families during a ceremony at Bomana War Cemetery on Sunday.

“The strength and compassion of the Fuzzy Wuzzy Angels saved many Australian lives during World War II. The Angels represent the spirit of what we hold so dear in Australia – courage, tenacity and mateship,” he said.