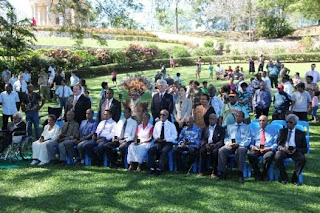 The Fuzzy Wuzzy Angels contribution to supporting Australians in Papua New Guinea during the Second World War, has been honoured today at a ceremony in Port Moresby.

The Minister for Veterans’ Affairs, Warren Snowdon, was represented at the ceremony, held at the Bomana War Cemetery, byParliamentary Secretary for Defence, Senator the Hon David Feeney, who presented commemorative medallions to 13 recipients.

Senator Feeney said these medallions are just one way to show our gratitude to the Fuzzy Wuzzy Angels.

“We are forever indebted to the kindness and the invaluable assistance they provided to Australians during the Second World War.

“Many Australians survived the Kokoda campaign due to the strength and compassion of these brave people. Greater casualties and loss of life among the troops would have occurred if not for the Fuzzy Wuzzy Angels,” he said.

Senator Feeney paid tribute to all Fuzzy Wuzzy Angels saying they represent the spirit of what we hold so dear in Australia – courage, tenacity and mateship.

Affectionately known as Fuzzy Wuzzy Angels, an estimated 50,000 Papuan and New Guinean civilians supported Australia in the Second World War by carrying supplies, building bases, airfields and other wartime infrastructure, and evacuating the sick and the wounded from fighting zones.

They also helped Australians soldiers trek through the jungles of the Owen Stanley Ranges, including the infamous Kokoda Track.

More than 600 Australians were killed and over 1, 000 wounded during the Kokoda campaign.

Mr Snowdon said the Australian Government is pleased that 34 Fuzzy Wuzzy Angels have been presented with the Commemorative Medallion since it was first announced in 2009.

“I would encourage other Fuzzy Wuzzy Angels and their widows to consider applying for a medallion to recognise the individual contribution they, or their loved one has made to our country’s servicemen.

For more information on medallion nominations contact the Department of Veterans’ Affairs on 02 6289 6136 or visit www.dva.gov.au