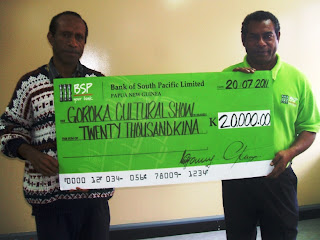 Samuel said he was really grateful to the BSP management for coming on board to sponsor this year's show.

"Your sponsorship demonstrates your commitment to promote our culture, which is fast phasing out," he said.

He said BSP contributed in a big way towards civic pride in Goroka through the weekly cleanathon conducted by Elijah and his staff, and donation of empty drums to the Goroka Area Authority last year.

Samuel appeal to the people of Eastern Highlands to take ownership of Goroka and do their bit to keep the town clean.

He said Goroka would be chock-a-block with visitors next month for the show.

"We have got to portray a positive image by doing our bit to keep the town clean," Samuel said.

Elijah said BSP was happy to assist such community events such as Goroka Show.