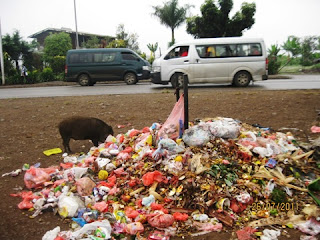 Caption: A pig feasting on rubbish right along the Highlands Highway in the centre of Goroka, opposite the airport.-Picture by DAVID RUMBA RUMBA

With just over a month to go before the world-famous Goroka Show, the town is stinking with piles of uncollected rubbish everywhere, which are feasted upon by pigs in full view of everyone.

Goroka resident David Rumba Rumba has called on Eastern Highlands Governor Malcolm Smith Kela, Goroka MP Thompson Harokaqve, lord mayor, town manager, and provincial and district administrators to urgently attend to this if the town is to save face.

Another source told me that rubbish drums set up around town by major Goroka Show sponsor Bank South Pacific – whose staff are involved in cleaning the town every Friday – have been removed.

"The sight is very distasteful and abhorrent," a concerned Rumba Rumba said.

" Rubbish everywhere, not just anywhere, right in the middle of town, opposite Bird of Paradise Hotel, next to the airport, the post office, the busy shopping fronts at popular West Goroka, vegetable market and highway bus stops.

"The whole of Goroka stinks!

"Rubbish heaps all around waiting for ever to be collected and disposed of.

"Even pigs are free to roam and feast on the rubbish!"

Rumba Rumba said there was virtually no attempt by the Goroka Urban Town Authority, provincial government and district office to fix up the mess the town was sliding into.

He predicted that tourists and visitors to Goroka would be shocked by the sight of the filthy town next month.

"What are we trying to showcase?" Rumba Ruma wondered.

"Our rich traditional cultures mixed with our unhealthy and filthy way of life which is very evident with the current state of Goroka town?

"The challenge is now on the Governor, Member for Goroka, lord mayor, town manager and provincial and district administrators to act quickly to fix up the mess and start beautifying the town.

"They must come along with dump trucks to clean up the town, including the drains, and dispose of the stinking rubbish properly.

"After a major clean up, they must enforce litter laws and start punishing law breakers.

"There should be no excuses whatsoever.

"If steps are not taken to rectify this unhygienic and hazardous problem,  then the citizens of Goroka should be seriously thinking of instituting class action against the authorities for neglect of duty,  thereby endangering the lives and health of its people and putting residents' lives at great risk."