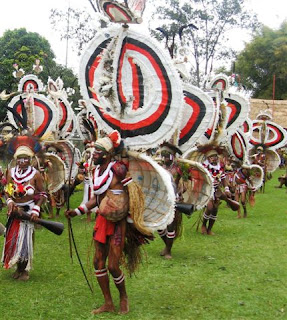 Caption: A colourful singsing group during the 2010 Goroka Show at the National Sports Institute.-Picture courtesy of GOROKA SHOW COMMITTEE

This was confirmed at the launch of PNG’s longest-running cultural festival, which was first staged back in 1957, at a function attended by sponsors and potential sponsors in Goroka last Wednesday night,

Traditional major sponsors such as SP Brewery and Coca-Cola Amatil (PNG) were represented while National Gaming Control Board, while not present, indicated its continued support this year.

Bank South Pacific came good with K20, 000, presentation of which was made by Goroka branch manager, Reuben Elijah.

Also joining the bandwagon was Lae Biscuit Company with K5, 000;  PNG Japan Ltd with K5,000; while Ramu Agri-Industries Ltd committed 25,000 sachets of sugar (equivalent to 50 cartons) for the singsing groups.

Organising committee chairman, Gideon Samuel, acknowledged the presence and support of sponsors, and appealed to Eastern Highlands provincial government to give more support to the event.

“Other shows in the country receive adequate financial backing from their host provincial governments to the tune of more than K100, 000 to host their shows,” he said.

“Having said that, it is not my intention to discredit the provincial government but to point out that it is really impossible to host a show of the calibre of Goroka Show with K20, 000 or K10, 000 at this point in time, taking into consideration the higher cost of goods and services.

“Goroka Show, as we all know, is a historic event,” he said.

“Goroka Show first started as the Highlands Show and was first staged in 1957 under the colonial administration to unite the various warring tribes of the region, take stock of the progress of development and to introduce the concept of economic development to a people suddenly in confrontation with civilisation and the material world.

“In fact,  to this very day,  I remain convinced that Goroka Show played its part in the dissemination of information on coffee cultivation to the indigenous people because the very people who were instrumental in promoting coffee were also involved in the planning and staging of the Goroka Show in the early years.

“Goroka Show was also responsible for the exposure of the famous Asaro Mudman, which has gone on to become the cultural icon of Eastern Highlands. “

Samuel commended Goroka Chamber of Commerce and Industry for raising the profile of the show since 2005, through the website www.gorokashow.com , at its own costs

“Today I receive queries from all over the globe on information regarding show dates, accommodation and many more,” he said.

“Just a while ago, I receive an email from a former resident who told me that she was on the inaugural organising committee, and that she is intending to come again for this year’s event.

“Last year, we had a record of 800-plus tourists and that is attributed to the ongoing internet marketing through our website, courtesy of Goroka Chamber of Commerce and Industry.”