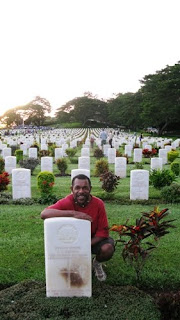 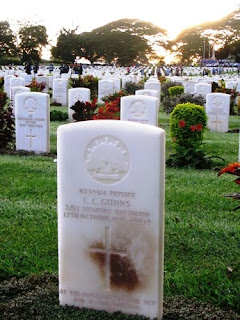 Yesterday being Remembrance Day reminded me of an emotional experience I had at the Bomana War Cemetery outside Port Moresby on ANZAC Day this year.

Last November, I received an email from Australian Philip Gunns, wondering if I could put him in contact with someone who could take a picture of his uncle Leslie Charlie Gunns’ grave site at Bomana.

“I found your email when I was looking up some information about Bomana War Cemetery, where my uncle is buried,” he told me.

“I was wondering if you could put me in contact with someone you may be able to take a photo of the grave site for me.”

I offered to take a picture next time I was at Bomana, however, didn’t have a chance to travel up there until the ANZAC Day Dawn Service on April 25.

After the service, I enlisted the help of my elder brother David and my nieces and nephews to look for Leslie Gunns’ grave, which wasn’t that difficult.

Phil Gunns was a much-relieved man after I saw his uncle’s grave.

“Regarding Les, he was only 19 when he was killed, believed to be one shot from a sniper in a tree and killed instantly,” he said.

“He was a bit of an action man and stood up for himself, played junior rugby union for local club Eastwood in Sydney,  also had a few amateur boxing fights and was looking to turn pro when he returned from the war.

“He was so keen to join the war that he ran away from home at 16 and went to Queensland and put his age up to 18 and joined the army.

“His mum and dad asked the Salvation Army to help find him, which they did, and when the army found out he was discharged.

“When he was able to join his elder brother returned from the Middle East and claimed him to join the same outfit.

“His elder brother was the man behind him when he was killed.

“He was killed on the Kokoda Track near a place called Myola, where he was first buried before he was repatriated to Bomana

“That’s all I really know as he was killed 14 years before I was born.

“Hope this helps you.

“Once again thank you for the photos.

“They will greatly appreciated.”