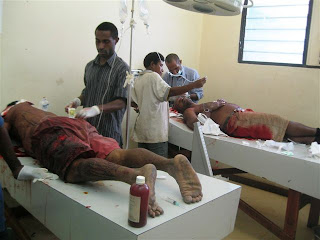 Caption: Two of the injured receiving treatment at the Port Moresby General Hospital.

Story and picture by JUNIOR UKAHA

A senior figure in the security business is dead and two other persons critically injured after they were ambushed and attacked by Tari settlers at Nine Mile yesterday, The National reports.

John Sine Kaupa, the operations manager of Kuima Security Services (KSS), was hacked to death by bush knife wielding men from at around 6am after he went to inspect a company bus that was allegedly damaged by the settlers earlier that morning.

The killing turned into an all-out ethnic clash with close to 10 homes razed when relatives of Kaupa from Chimbu,  who live at the 9-Mile Ridge,  mobilised with Eastern Highlanders and attacked the Taris, who they said, were responsible for the death of Kaupa.

Eyewitnesses said the mob from Chimbu razed the buildings, including trade stores, and looted a number of Tari-owned trade stores.

Eyewitness James Apa said a group of men from Tari armed with bush knives, axes and metal rods,  chased Kaupa from the vicinity of the market to a residential area belonging to a Margaret Yakari and killed him.

Apa said the men then left his decapitated body in a nearby drain and fled.

Kaupa was chopped on the forehead, right knee, hand, foot and face.

Eyewitnesses from the 9-Mile Ridge area said trouble started when a Kuima Security guard,  identified only as Francis,  had a confrontation with a Tari man early that morning.

Eyewitnesses said Francis jumped on a 25-seater bus belonging to KSS and was heading for work when the bus was ambushed by a mob from Tari who were drinking beer at a trade store near Sigirap Market.

Community leader James Mogia said the bus, including the guards, were attacked by the men who smashed all windscreens.

Mogia said the guards then radioed Kaupa, who went with reinforcements to verify the matter but was attacked, resulting in his death.

Eyewitnesses said a pump action shot gun that was in the deceased's possession,  and which he used to fire warning shots to disperse the mob,  was taken when he was killed.

Johnna Kaupa, another elderly man from Chimbu, who works a security guard with KSS, was chopped on the head when the Taris turned on the reinforcements that went to investigate and retrieve the damaged bus.

An elderly Tari man, Pori Walepa, was slashed on his back and left shoulder during the ensuing clash.