In the past 18 months, the face of the Old Lae Airport has changed dramatically, and in 2010 alone, over 700 containers of project cargo for the LNG plant were stored on the tarmac until ready for delivery to the Highlands.

Development of the Old Lae Airport epitomises the mind-boggling development Lae is undergoing with all the current resource projects. 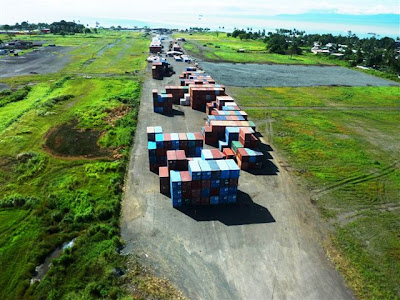 The development at the Old Lae Airport worries Jonathan Saing, the vocal chairman of the Ahi Landowners’ Association, which represents the traditional landowners of Lae. 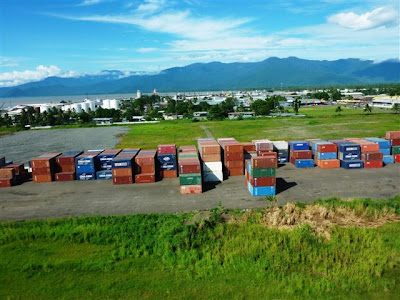 If the Ahi people miss on airport benefits, it will be second time unlucky for them, having first missed out in the 1920s when their land was forcefully taken away from them to build an airstrip during the Wau-Bulolo gold rush.
Saing is growing old; however, his concern for his people of the six Ahi villages of Yalu, Kamkumung, Hengali, Butibam, Yanga and Wagang is what drives him on.
He says the undeveloped lease land (UDL) at the Old Lae Airport has seen so much foul play and corruption among unscrupulous landowners, businesses and politicians.
“The UDL at the Old Lae Airport is a real mess,” Saing says.
“At the rate we are going, we Ahi people, traditional landowners of the Old Lae Airport, won’t have any footprints there.
“This is very worrying.
“I’m sad to say that our young children will be completely lost.
“I stand between the old and the young.
“I want our Ahi clan leaders to be strong and hold on to their land.
“I also want to uphold the wisdom of elders for the good of the young people.”
In March 2009, in a landmark decision, the Supreme Court approved an application for a stay order taken by Butibam and Kamkumung villagers against the Morobe provincial government and the State over development of the controversial Old Lae Airport land.
The court noted that the landowners had not been adequately compensated for all the anguish and turmoil they had gone through over the years.
It has long been a sore thumb in Lae as Morobe Governor Luther Wenge and his then administrator, Patilias Gamato, fought a war of words both within and out of court with the villagers.
In Early 2009, things came to a head at the Old Lae Airport when some Butibam women were manhandled and beaten by Lae police.
Village elders from Kamkumung and Butibam, at that time, hailed the Supreme Court decision as a huge victory for their people, whom they said had been robbed of their birthright.
This controversial piece of land has a long and colourful history behind it.
The discovery of gold at Edie Creek above Wau in 1926 sparked off a gold rush which led to the exploitation of the rich deposits of the Bulolo-Watut river system by large-scale mechanised mining.

The rigours and cost of the eight-day walk into the goldfields and the difficulty of building a road from the coast led to the early introduc¬tion of an aviation service.
The driving force behind the development of the goldfields was Cecil J Levien, a former Morobe district officer who has been described as a “rare and formidable combina¬tion of opportunist, practical man and visionary”.
Levien persuaded the directors of Guinea Gold NL that startling profits would be made by any aviation company that could provide a service to eliminate the arduous walk between Salamaua and Wau.
He secured an option on a small DH-37 plane in Melbourne and engaged a pilot, E A ‘Pard’ Mustar, to bring it to New Guinea.
He then selected Lae as the best place for the coastal airstrip and without bothering to obtain official permission, took on about 250 labourers to clear and level a landing ground under the supervision of Tommy Wright, the foreman of the agricultural station.
The construction of the airfield was perhaps the biggest enterprise ever undertaken at Lae and greatly perturbed the local villagers, who watched amazed as a vast area of bush was torn down and gardens were flattened.
They were in for further surprises when Mustar and his mechanic, AWD Mullins, flew in from Rabaul, where they had been assembling and testing the plane.
Their arrival brought the full power of Western technology home to the villagers with a shock.
The mastery of Europeans, previously seen in their goods and possessions, was now indisputable.
The old Lae airport has played a significant role in the history of the town, Papua New Guinea, and the whole world for that matter.
Mordern day Lae and PNG grew because of the airport
The greatest airlift the world had ever known started from Lae to the Bulolo goldfields in the 1930s.
World attention was focused on Lae in 1937, and continues to this day, when it was the last port of called for the famed American aviatrix Amelia Earhart before she disappeared somewhere over the deep-blue South Pacific ocean.

Lae airstrip was bombed out by the Japanese on January 21, 1942, however, recovered to become a major player in the development of post-war PNG.
The old Lae airport started losing its thunder in 1977 when Nadzab, an American World War 11 strip, became operational.
Fierce political squabbling over the pros and cons of Lae and Nadzab continued until 1982, when, in an unsolved mystery (just like Amelia Earhhart), the Lae airport terminal was burned down.
Nadzab had taken away its glory; however, Lae continued to be used by Air Niugini and other third-level airlines until 1987.

Lae continued to be used as the base for the PNG Defence Force Air Transport Squadron until it was transferred to Port Moresby in 1992.
After that, one of the greatest icons of PNG history was literally left to the dogs, and became covered by bushes.
It was only recently that the land was sub-divided for commercial purposes as well as given back to the traditional landowners.
Once bitten, twice shy, and the Ahi people don’t want to be shortchanged for the second time, surmises Jonathan Saing.
Posted by Malum Nalu at 8/17/2011 05:28:00 PM