The royal couple has a packed itinerary of events for a tour of Australia, New Zealand and Papua New Guinea next month.

The Prince of Wales and Duchess of Cornwall will be treated to a barbecue in the outback, an afternoon on Bondi beach and a tour of a special effects workshop used in the making of The Hobbit movie when they visit Australia and New Zealand. 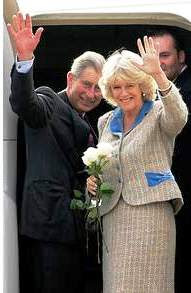 Details of their packed tour, which also takes in Papua New Guinea as part of the Queen’s Diamond Jubilee celebrations, have been announced.
Camilla will be making her first trip to the three countries, in a private or public capacity, while Charles, a seasoned traveller, has visited the southern hemisphere nations many times.
Among the highlights will be a visit by Prince Charles behind the scenes of the new blockbuster movie from Lord of the Rings director Peter Jackson.
He will visit a leading workshop in New Zealand that created special effects for the much anticipated fantasy film The Hobbit: An Unexpected Journey.
The heir to the throne will meet the filmmaker on the day of his 64th birthday, November 14, and be shown make-up props worn by actors including The Office star Martin Freeman, who plays the lead character Bilbo Baggins.
A royal aide said that in the workshop, based in Wellington, Charles would "come face-to-face with rather extraordinary, rather terrifyingly in some cases, life-like prosthetics including the feet and hands of the Baggins family".
The themes of the visit include service to the community, encouragement of economic growth and innovation, promotion of youth enterprise, celebration of sport in the community and support for the Armed Forces.
Speaking about the first leg of the tour to Papua New Guinea, which begins on November 3, the aide added: "The visit is centred on the capital Port Moresby but also includes a visit to a nearby fishing village called Boera where a traditional and probably rather dramatic welcome is planned by the local inhabitants."
In Australia, the royal couple have set themselves the task of visiting four major cities - Melbourne, Adelaide, Sydney and the capital Canberra - as well as the outback town of Longreach in Queensland and the island state of Tasmania in just six days from November 5-10.
The royal couple has willingly accepted an invitation from race organisers to play an important part in Australia's most famous racing event, the Melbourne Cup, at which Camilla will present the top prize.
"We were asked if they would like to do it, and of course they are both great racing fans ... and very touched that they've asked the Duchess to present the Melbourne Cup," Clive Alderton, private secretary to Charles and Camilla, said.
It is a starring role for Camilla, 65, who will overcome a dislike of air travel to make the long trek south.
Other events will see them highlight healthy eating in schools, meet Australian cricketers playing with disadvantaged youngsters and promote the wool trade.
The final leg to New Zealand, from November 10-16, will see the royal couple meet popular children's author Lynley Dodd, writer of the Hairy Maclary stories about the adventures of a hairy dog.
The final day takes the royal travellers to Christchurch to see how residents have rebuilt their lives after last year's devastating earthquake.
Details of the tour come as a new survey commissioned by the Australian Republican Movement shows 48% of Australians want a republic.
However, perhaps riding on the popularity of the Duke and Duchess of Cambridge, only 45% of under-30s questioned want a republic - fewer than any other age group apart from those 70 or over.
Posted by Malum Nalu at 10/24/2012 05:11:00 PM