Tabubil, PNG: A new aircraft belonging to the Fly River people that benefit from the operations of the Ok Tedi mine arrived in the Western province on October 8, 2012. 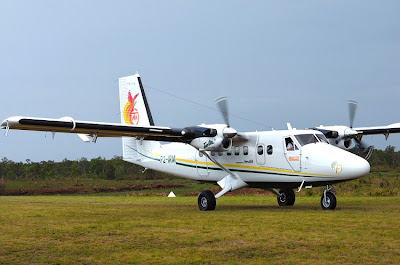 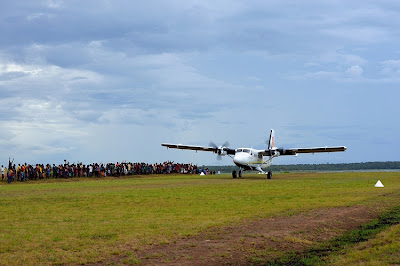 The aircraft, a brand new Series 400 Twin Otter manufactured by Viking in Canada, is the first of two aircraft Ok Tedi Development Foundation Limited (OTDF) has procured on behalf of the 156-villages currently benefiting from the Ok Tedi Community Mine Continuation Agreement (CMCA).
On arrival into the country,  the aircraft was given a rousing welcome at Suki in the South Fly district by traditional dancers and villagers before it flew to Tabubil to be received by OTDF chairman and Ok Tedi Mining Ltd (OTML) managing director and chief executive officer Nigel Parker, OTML general manager government and external relations Musje Werror and staff of both organisations.
Parker said the decision to purchase the aircraft would not have been possible without the vision of the CMCA community leaders and the efforts of OTDF to enable this vision.
“These aircraft have a good 30-year life to them and I trust and hope that they will serve the communities well,” he said.
“I must commend the community leaders for embracing this vision as this decision leverages the value of compensation being received by the communities from the mine to much higher returns in both tangible, visible and long life assets for the benefit of their communities.”
OTDF CEO Ian Middleton,  who travelled on the aircraft described its arrival as an historic occasion for PNG, Western province and the people living within the CMCA regions.
“This is a significant occasion for the people and a wonderful opportunity made possible by the operational requirements of OTML,” he said.
“On behalf of the CMCA communities, OTDF has secured a 15-year master lease agreement with OTML with a guaranteed 8% return per annum for the aircraft.
“This will generate valuable sustainable development funds that will benefit not only current but also future generations.”
Associate director on the OTDF board representing the people of the North Fly, Michael Gen thanked OTDF and OTML for helping the communities improve their livelihood through such investments and for giving them hope.
“The arrival of this aircraft shows that we are working together with our partners and delivering our people their real needs,” he said.
This Twin Otter is the first of two aircraft OTDF has facilitated the purchase of, at a cost of US$7.4 million, for the 100,000-plus people of the CMCA regions who will now share in the benefits of a long term lease.
The aircraft will be operated from a Tabubil base by a dedicated team of Hevilift pilots and engineers.
Posted by Malum Nalu at 10/12/2012 04:02:00 PM