Australia lamb exports to PNG up 58%

By DEANNA LUSH of Farm Online
OVERSEAS markets are lapping up Australia’s record cheaper supply of lamb but yardings and slaughter numbers are tipped to plateau to the end of 2012, market analysts say.
Volumes exported during October to the Middle East were up 79 per cent on 2011, China up 69pc, Papua New Guinea up 58pc and the United States up 25pc. 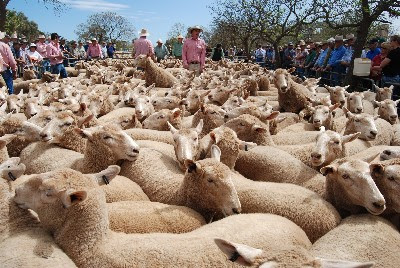 While total exports for October had been 18,574 tonnes shipped weight, the record had been driven by increased supply and cheaper product, reflected in saleyard prices to growers.

Overall, while the volume of Australian lamb exported was up 17pc on 2011, the value of those exports was down 4.3pc.

“The number of lambs slaughtered in the first 10 months of 2012 is up 32pc on the same period last year. That’s the obvious thing,” Ms Sivyer said.

“The reduction in value (of exports) is being seen strongly in the US, which is Australia’s largest value export destination. From January to August 2012, export volumes have increased 6pc on the same time last year but the value of those exports has decreased 22pc.”

The slight lift in the Eastern States trade lamb indicator last week – up 3c/kg carcase weight to 351c/kg - was because of restockers coming back into the market.

She expected rain last week would see many producers hold onto sheep and lambs if conditions improved.

Meat and Livestock Australia chief economist Tim McRae said stock numbers coming through for slaughter were likely to plateau for the rest of the year.

He did not expect to see large yardings in November and December like there had been in 2011, which was part-seasonal and part-income pressure.

“Recent rain could provide some flexibility to hold on to numbers,” he said. “This year has been so far ahead of last year’s slaughter numbers, we may have seen some of the numbers come in early.”