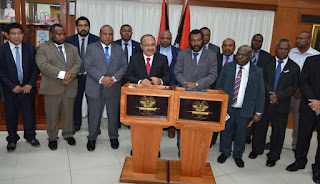 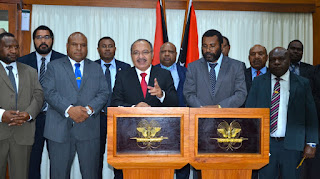 Prime Minister Peter O'Neill has welcomed the decision by the Speaker of Parliament and Member for Finschafen Theodore Zurenuoc MP, and Member for Kundiawa-Gembogl, Tobias Kulang MP, to join the People's National Congress Party.
O'Neill made the announcement at a press conference at the National Parliament yesterday.
The Prime Minister welcomed the members saying that the party continues to grow because of the stability that it is providing to the nation.
"Stability in terms of leadership, stability in terms of policy and stability in the management of the affairs of the economy of the country is bringing members to the PNC Party,"  O'Neill said.
"Working with the speaker over the last two and a half years of the parliament and working with our brother member, Tobias Kulang, we have come to recognize that we need to put our talents and abilities together for the good of the country.
"Them joining of Government adds further stability so that we can continue to roll out the programs that they have started.
"The talent and experience that the two gentlemen will bring to the party will contribute further in making sure that we strengthen the party's ability so that we can deliver more to our people throughout the country."
The Prime Ministers said the Government has very innovative policies like free education and healthcare for which credit should also be shared with  Zurenuoc.
"Many people might not know that free education is the brainchild of the Speaker when he was Education Minister, so now he has come to the core of the party where we are implementing that policy."
The Prime Minister further highlighted the professionalism and independence of Theodore Zurenuoc in carrying out his duties as the Speaker of the Parliament.
"Many of you know how Parliaments in the past were managed, now we know things are functioning and Parliamentary business is being conducted.
"We have not missed one day of Parliamentary meetings since this parliament started.  This is a credit to the speaker."
The Prime Minister thanked the People's Progress Party for their understanding and respecting the Members' decisions.