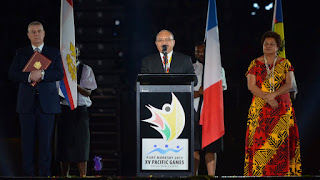 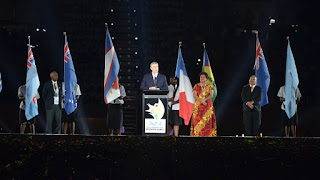 Prime MinisterPeter O'Neill CMG, MP, has praised the organisers and the "grassroots stars" of the Opening Ceremony of the XV Pacific Games in Port Moresby.
>l O'Neill made the comments following the start of the Pacific Games that brought together 3,500 performers from around the nation, who set the scene for the arrival of more than 3,000 athletes into the stadium.
"The opening ceremony for the Pacific Games last night was a proud demonstration of Papua New Guinea's diverse culture.
"I congratulate the hundreds of people in the crew, and the thousands who came from around the nation to perform.
"The grassroots stars of the show, the people in the sing-sing groups and the school children, warmed the hearts of the thousands of people in the stands and millions of people watching the broadcast around the world.
"Never in our history have we seen such a professional stadium performance as we saw last night.
"The opening ceremony performance set a new standard for major events in Pacific nations.
"When the athletes of our region entered the stadium it was an extremely proud moment that sports men and women of all participating countries will never forget.
"I thank the Papua New Guinea team for representing our nation and look forward to your performance in the coming days."
During the ceremony the Prime Minister officially welcomed athletes from 24 competing teams before the XV Pacific Games was opened by the Duke of York.
"I know that these Games will be the best ever and many new records will be set," PM O'Neill said in his speech.
>l "The sporting facilities that we have built for these games are world-class, and they will continue to benefit our region for generations to come.
"These facilities are also a demonstration of the change that is taking place, and the new standards that are being set in the Pacific.
"Let me thank the thousands of volunteers, thousands of workers and officials who have worked very hard over the past three years to make this Games a success."
The Prime Minister said the Pacific Games is about more than a sports competition, and is an opportunity to enhance regional unity.
"The Games brings our vast region together and builds strong bonds between people, between teams and nations."
O'Neill urged all participants to enjoy the games and make many great memories.
"I hope all visitors experience the warmth of the welcome my fellow citizens will extend to each of you.
"Good luck to the athletes from every country – please make us all proud."