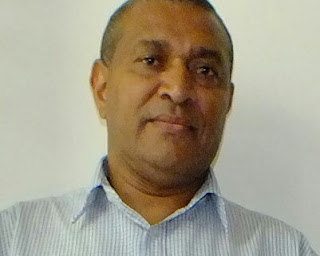 The National Government has been urged to give preference to landowner companies in regards to terminal management at the new Lae Port Tidal Basin.
Representatives of landowner companies from the Labu and Ahi villages of Lae made the call on Tuesday after announcing that they had joined forces to create a new joint-venture company.
The two companies, Labu Holdings Ltd and Ahi Holdings Ltd, have formed a new JV called Morobe International Terminal Ltd to bid for terminal management at the new Lae Port Tidal Basin.
Labu Holdings and Ahi Holdings have a stranglehold on stevedoring at the Lae Port through their respective partnerships with Steamships Trading Company Ltd and Consort Shipping Ltd.
Ahi Investment chairman and Riback operations manager George Gware (pictured) told The National that the two companies also combined in 2013 to stop a foreign stevedoring company, Patricks, from starting operations at Lae port.
"Last month, when the tidal project was actually completed, there was also all this talk about government appointing a new (terminal) operator," he said.
"Finally, we saw in the adverts in the papers, that they're now talking about expressions of interest for an international company to come in and set up in Lae and also in Motukea.
"Even though we've got Morobe International Terminal at the current Lae Port, whoever that new operator is that comes into the Tidal Port, what will happen is that we will all compete for the same cargo volumes coming through.
"If the new operator comes in, and is able to secure and take contracts off from us from the current international shipping lines that have contracts with us, then we will slowly lose volumes, and over time, if we continue to lose volumes to the point that we cannot sustain, they we'll have to close down.
"That is the biggest concern we currently have as landowner investors."
On Tuesday, Morobe International Terminal Ltd presented its expression of interest for terminal management at Lae Port Tidal Basin, to PNG Ports Corporation.
"Our biggest concern, as landowner groups, is that unlike the resource projects in the Highlands or other parts of PNG where the government gives them seed capital to start off, when we started off when the (stevedoring) industry was nationalised in 1994, they didn't give us any seed capital," Gware said.
"It was up to us to go out and secure finance.
"From 1995 up to 2015, we've repaid all those loans, we're getting the returns and we're now starting to enjoy the benefits, and all of a sudden, when we as a country are about to celebrate our 40th Independence anniversary, we see the move by the government in promoting an international operator to come in."
Labu Holdings chairman Nasinom Dau said the people of Labu stood united together with the people of Ahi in the new JV.
###