How much broadband internet costs around the world: Papua New Guinea among most expensive

The internet has spread all across the globe with remarkable speed, but it is still quite hard to afford an internet connection in some countries of the world. Howmuch.net has created a map of internet prices around the world, and you may be surprised by how cheap – or expensive – the internet can be in some places! 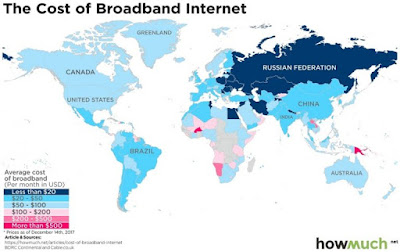 In Western Europe, Italy is the cheapest with an average price of USD 28 per month, followed by Germany (USD 34), Denmark (USD 36) and France (USD 37). In the UK, the average price is USD 40.5 per month. Six of the top ten countries where broadband is cheapest were former members of the USSR, including Romania, where the average cost is USD 14.
In North America, the cheapest internet connection can be found in Mexico, with an average cost of USD 26 per month. In the US and Canada, people pay between USD 55 and 66 for their internet.
In South America, the internet is generally quite affordable. The continent-wide average is around USD 50 a month, but countries like Brazil or Argentina can offer prices as low as USD 31-34 per month. On the other hand, small countries like Guyana, Antigua and Barbuda, Barbados or Panama go above USD 100 per month, and the most expensive internet is by far found in Haiti, at an average of USD 224.
Asia has the most affordable internet overall, and countries like Russia, Kazakhstan or Nepal have extremely low prices ranging from USD 10-20 per month. Surprisingly though, the cheapest internet in Asia – and in the world – is found in Iran: only USD 5.4 per month on average! At the other end of the spectrum in Asia we can find Laos (USD 231 per month), Qatar (USD 149), UAE (USD 155) or Kyrgyzstan (USD 112).
In China, broadband internet is around USD 32 per month. In India, it’s USD 37.6, and similar prices can be found in Singapore, Malaysia, Thailand or Pakistan; Japan is a little higher, with an average of USD 50 per month.
In Africa, the situation is not great as many countries didn’t even have data to review, and for those where there is internet, the extremes are huge. The best prices are in Egypt (USD 12.3 per month), Tunisia (USD 19), Algeria (USD 32) or Morocco (USD 39). Higher prices are found in South Africa (USD 59), Ethiopia (USD 65), Libya (USD 60) or Mozambique (USD 69).
But there are many countries in Africa where the internet is extremely expensive, despite the fact that people in these countries don’t have a lot of wealth. In Zimbabwe, Tanzania, Somalia, Angola, Niger and Mali, a broadband connection will cost between USD 115 and USD 170. However, there are two countries where the price is actually ridiculous: Namibia, with USD 464 per month on average, and Burkina Faso, with a whopping USD 923!
In Australia and New Zealand, the internet is relatively reasonable considering average incomes (USD 60 and 65 per month, respectively). In the rest of Oceania, the prices are quite high, ranging from USD 57 in Fiji to USD 177 in Cook Islands. But there’s also a country that’s completely off the charts – if you want to get internet in Papua New Guinea, you’ll pay USD 590 per month!