How Papua New Guinea can learn from the Taiwan experience 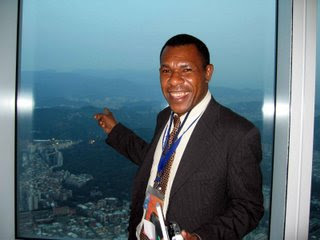 A half-century ago, was basically on the same boat that is on right now.

It was a resource-poor, under-developed tropical island.

Through sustained good policies over the past few decades, it has lifted its population from poverty, joining the ranks of the most-prosperous and competitive economies in the world.

Unlike , , , and , it was able to weather quite unharmed the Asian financial crisis in 1997.

While advanced Asian countries have emphasised large corporate units, the Taiwanese economy is dominated by 97 per cent small and medium enterprises (SMEs).

While this might seem a disadvantage, the industry is structured in such a way that clusters of SMEs can service larger enterprises.

The entrepreneurial spirit generated by ’s difficult economic situation and lack or resources in earlier decades emphasised flexibility and cost-consciousness.

Taiwanese companies are accustomed to turbulent times and constant change, and expect to have to change products every six months.

This structure provides great flexibility and rapid response times, while allowing for a more human scale and stronger personal relationships within the companies.

Today, is a technological powerhouse that ranks among the world’s top producers of notebook personal computers, flat panel displays, modems, motherboards and other electronic components and products.

In 2004 it ranked fourth globally in the production value of its IT hardware.

It was also fifth in the World Economic Forum’s 2005-2006 Global Competitiveness rankings, with a strong showing in the area of technology and innovation, ranking 3rd in the world in the technology index.

The 2005-2006 Global Competitiveness Report highlights ’s exceptional strength in technology issues, including an impressive capacity for innovation, firm-level technology absorption, university/industry collaboration in research, and its pre-eminent position in the use of the latest technologies, from mobile phones to personal computers and the Internet.

is indeed a model for countries, such as our , who are striving to improve their performance and competitiveness in information and communication technologies.

’s transition from a poor agricultural society into an increasingly-sophisticated powerhouse of high-technology manufacturing and the world’s leading producer of information and communication technology products is, without doubt, one of the most-compelling development stories of the past half century.

However, as with all other countries that wish to maintain a competitive edge, the authorities will have to remain vigilant.

There is scope for further improvements in enhancing the quality of public institutions by increasing levels of transparency and openness.

should in coming years aim to reach the standards of the Nordic countries in this area.

It has already matched their technological prowess.

Now it must reach their levels of efficiency in public sector management.

In his case study on Taiwan in the 2004-2005 Global Information Technology Report (Lin, 2005), FC Lin traces the evolution of Taiwan’s ICT industry through the first economic miracle of Taiwan’s transformation from an agricultural to an industrial economy (1953-1986), and describes the second miracle of its industrial restructuring (1987-2000), when low technology industries were forced to relocate overseas and were replaced by technology-intensive industries, particularly in the Information Technology sector.

Lin attributes these successes to the following factors:

He identifies the future challenges as breaking into the advanced industrial and research areas of application integration, technical innovation, and standards formulation as global competition reduces profit margins.

Today, everyone recognises the economic challenge that mainland represents for .

With the rapid growth of the economy in mainland , there are increasing business ties between the mainland and , despite as yet unresolved issues on the political front.

Trade between the two is growing rapidly, and a large number of Taiwanese, perhaps up to a million, are now working in mainland .

There is a high level of investment as well, now estimated at US$100 billion, as the mainland is the logical place for Taiwanese businesses to delocalise production that is no longer competitive in Taiwan, taking advantage of low land prices and cheap labour.

These strengthening trade, economic and business links will undoubtedly serve to create the conditions for a peaceful co-operative resolution of outstanding bilateral political issues.