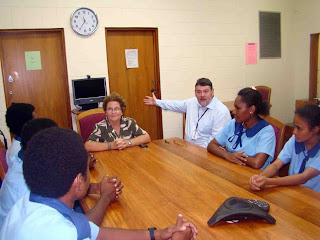 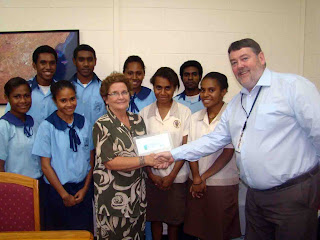 Speaking to students from the and St Josephs International College, the Minister said they would be part of an important meeting when they discussed MDG issues with peers from six schools in via a video conference linkup.

“It is a very high level meeting that you are going to be speaking to so you should be very proud of that. And the voice of young people is very important so what you are saying and doing will be very important,” the Minister added, when meeting the students at the British High Commission.

This Friday’s video conference between the PNG and New Zealand students is a side programme of a two-day MDG symposium at the Victoria University, Wellington in which Dame Carol will participate in as well as present a paper titled ‘Maternal Health in PNG: Reality, Challenges and Possible Solutions’.

The British High Commission is funding Dame Carol’s travel to with the Acting High Commissioner Colin Glass, upon presenting the Minister with her travel documents, saying he hoped the symposium and its outcomes will be beneficial for PNG.

The video conference between the PNG and students would not be possible without the assistance of the World Bank, added Mr Glass as he expressed his appreciation to the bank’s PNG office for making available their facilities.

The discussions between the 12 participating PNG students and their colleagues will focus on MDG 2 which is ‘achieve universal primary education’.

The MDGs symposium is being organised by the New Zealand Institute of Policy Studies in partnership with Oxfam New Zealand, the Council for International Development and the British High Commission, .