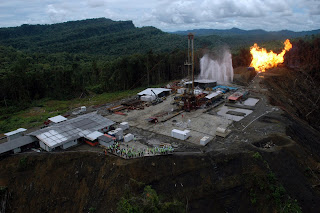 Antelope 1 flaring on March 3 this year

INTEROIL Corporation has confirmed it would develop a liquefied natural gas (LNG) project in Papua New Guinea soon to underpin its commitment as a long-haul investment and development partner.
The InterOil confirmation is intended to re-assure the government and Papua New Guineans that InterOil has no desire to pull out of PNG in the face of political pressure being applied by a small group of Cabinet Ministers claiming to represent the best interests InterOil’s industry competitors.
“InterOil is a wholly PNG-based energy house and is here in PNG to stay for the long haul as an investor and as a development partner,” said InterOil CEO and chairman Phil Mulcek.
InterOil and its joint venture partners, Petromin PNG Holdings Limited and Pacific LNG Operations Ltd., have submitted a project agreement to the government of PNG for the construction of a proposed LNG plant in Port Moresby.
The Prime Minister of Papua New Guinea, Grand Chief Sir Michael Somare and the Minister for Petroleum and Energy, William Duma, have stated their support for the proposed project and associated agreement.
As previously announced, the proposed LNG project targets a $6.0 billion two-train LNG facility, with each train capable of producing approximately 4 million tonnes of LNG per annum.
Current plans call for first production of LNG towards the end of 2014 or beginning of 2015.
“We are pleased with the support that our proposed project and associated agreement have received from key government officials,” Mr Mulacek said.
“By creating thousands of new jobs and other economic benefits, InterOil’s project has the potential to provide significant prosperity to the people of Papua New Guinea for years to come.”
The proposed LNG project is expected to have competitive investment returns compared to other projects under consideration in the region.
In particular, the high total volume of liquid content of the hydrocarbon resources estimated at the Elk/Antelope field as well as existing infrastructure in place, including the 99-year lease on government owned land for the LNG facility, deep-water harbour rights, jetty system with two berths for loading and off-loading ships, electricity, housing and roadways support the cost-competitiveness of the project and are expected to enhance investment returns when compared with other projects under consideration in the region.
Additionally, InterOil’s wells in the Elk/Antelope field are located in moderate foothills terrain, close to the coast and LNG plant site at Port Moresby, low in contaminants, and geographically protected from most weather disruptions.
At least 5,000 jobs are expected to be created at peak construction of the InterOil facility.
Economic returns from the project are expected to help fund public infrastructure and community services in Papua New Guinea, such as education and health, and provide income to land owners.
In addition to the previously-noted support received from the Prime Minister of Papua New Guinea and the Minister for Petroleum and Energy, the proposed project and associated agreement are also supported by other key members of the PNG government.
To support the project agreement, InterOil has recently provided two separate independent resource evaluations, one developed by GLJ Petroleum Consultants Ltd. and one developed by Knowledge Reservoir.
“Based on two separate independent resource evaluations prepared for InterOil and recently provided to Papua New Guinea officials, as well as the company’s own results attained to date, InterOil believes that the likelihood of further successful exploration efforts for more gas and gas condensate, and for the potential discovery of oil in commercial quantities, have increased,” continued Mr Mulacek.
“Like the Prime Minister, we recognise how important this project is to the development and reputation of Papua New Guinea.
“We remain committed to moving forward with this project and support the Prime Minister’s recent call for two projects to be developed at the same time.”

About the Elk/Antelope Field
InterOil has three exploration licenses surrounding the Elk/Antelope field onshore in Papua New Guinea; these licences cover a total area of approximately 4 million gross acres, of which InterOil is the operator.
Since late 2006, InterOil has drilled three gas or gas and condensate wells in the Elk/Antelope field and, in so doing, has established its wells as the first, second and third highest flow rates for onshore gas wells in PNG.
After preliminary testing for several weeks in March 2009, the Company’s Antelope-1 well flowed at 382 million cubic feet of natural gas per day (MMcfd) with 5,000 barrels of condensate per day (BCPD) for a total 68,700 barrels of oil equivalent per day (BOEPD).
GLJ Petroleum Consultants Ltd, an independent qualified reserves evaluator, prepared an evaluation of the potential resources of gas and condensate for the Elk/Antelope field, effective as at Dec 31, 2008 (the “GLJ Evaluation”) in accordance with the definitions and guidelines in the COGE Handbook and the Canadian Securities Administrators’ National Instrument 51-101 Standards of Disclosure for Oil and Gas Activities.
A summary of the GLJ evaluation is included in InterOil’s Annual Information Form for the year ended December 31, 2008, a copy of which is located at http://www.sedar.com/.
Additional data from the drilling of the Antelope 1 well has been obtained since Dec 31, 2008, which data is included in the evaluation prepared by Knowledge Reservoir of the potential resources of gas and condensate for the Elk/Antelope field, effective as at March 31, 2009.
Knowledge Reservoir is not an independent qualified reserve evaluator; as such term is defined in NI 51-101.
Based on these evaluations, as well as company results attained to date, InterOil believes that the likelihood of further successful exploration efforts for new gas and gas condensate, and for the potential discovery of oil in commercial quantities, has increased.

About InterOil
InterOil Corporation is developing a vertically integrated energy business whose primary focus is PNG and the surrounding region.
InterOil’s assets consist of petroleum licenses covering about 4.6 million acres, an oil refinery, and retail and commercial distribution facilities, all located in PNG, where the company has invested more than K2 billion to date.
In addition, InterOil is a shareholder in a joint venture established to construct an LNG plant on a site adjacent to InterOil’s refinery in Port Moresby/
InterOil’s common shares trade on the NYSE in US dollars.
The company is headquartered in Cairns, Australia and has offices in Houston, Texas, Port Moresby and Singapore.
Posted by Malum Nalu at 10/12/2009 10:53:00 PM