HIV/AIDS will impact on agriculture and food production

HIV/AIDS is already having a noticeable impact on households’ ability to produce their own food.
Escalating labour shortages are reported in some African countries due to high HIV/AIDS prevalence.
Food insecurity, labour shortage, loss of household income, shift in the type farming practices and loss of knowledge on traditional method of farming are some of the effects that HIV/AIDS could have on agricultural development.
Until recently, HIV/AIDS was considered to be mainly a health issue and programmes for combating the epidemic were managed by health science and health-related organisations.  However, the impact of HIV/AIDS on development programmes experienced in countries where HIV/AIDS prevalence is high, has forced the health and other development agencies to approach the problem from different angles.
The epidemic is now an important cross-sectoral development issue, which has far-reaching implications for policy and programs at every level than currently envisaged by leaders, policy makers and the public at large.
According the Food and Agriculture Organisation (FAO) of the United Nations, over seven million agricultural workers have died of AIDS since it was first detected in 1982.
Studies conducted by FAO in African countries with high HIV AIDS prevalence have found farming families affected by the epidemic are substituting cash crops for crops which require less labour.
FAO observed that Gwanda and Nakyerira regions of have abandoned coffee in favour of cultivated cassava and banana, which require less attention and care.
Affected families have also stopped cultivating rice in favour of maize and cassava. FAO also observed that affected families in have replaced cotton and groundnut (peanut) with maize.
While the impact of HIV/ AIDS is not yet seriously felt in , it is quite clear that the epidemic would have an impact on our agriculture and food production system, if it is allowed to spread at the current trend and not contained quickly (Figure 1).
This poses serious challenges to our agriculture and food production system, as up to 85% of the people depend on agriculture for their livelihoods.
Therefore, the agriculture sector cannot continue with business as usual but must join hands with other partners to jointly address the epidemic. 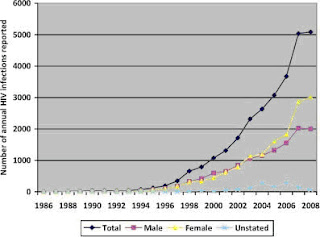 Key stakeholders in the agriculture sector need to understand and prepare for the likely impact of HIV/AIDS on our food and agricultural systems.
They need to develop strategies to address the likely impact that HIV/AIDS would have, particularly in relation to food, nutrition, and labour requirements.
It is important to explore which agricultural systems are being or will be affected in what ways and what aspects of each agricultural system are most vulnerable.
This will help identify and formulate strategies for the way forward for sustainable agricultural development.
It is essential for agricultural research and development (R&D) organisations to develop strategies to address issues concerning what is happening, what is likely to happen, what can be done, what are the likely responses, and gender issues.
It would appear that policies and strategies currently in place aimed at promoting or improving agriculture in PNG have not given serious enough considerations to the detrimental impacts and implications of HIV/AIDS.
NARI is aware of these issues and has initiated necessary steps to address the problem effectively by mainstreaming HIV AIDS.
Not only is the institute concerned with minimising risks and disruption and distress at its workplaces, but also with orienting its R&D activities to minimise and/or alleviate the effects of the epidemic on farming systems and agricultural communities.
To strengthen its commitment, the institute developed and launched its HIV/AIDS Workplace Policy in 2007 which emphasises NARI’s concern on the rapid spread of the epidemic, especially in the rural areas where NARI’s work is focussed.
NARI workplace policy is intended to provide guidelines for the institute practices with respect to its mandate and stakeholders, and the mainstreaming of strategies to deal with the implications of the epidemic in its core research and development activities.
While NARI and other stakeholders in the agriculture sector have initiated steps at organisation level to address the epidemic, the way forward is to approach the problem collectively, as the impact is likely to affect the entire agricultural sector, from food crops to plantations and livestock.
The future impact of HIV/AIDS on agriculture will depend, among other things, on finding ways to reduce the labour requirement by introducing less labour-intensive methods of production and farm mechanisation with simple agricultural tools.
It is anticipated that the epidemic would intensify labour shortages, increase food insecurity, loss of household income, shift in farming systems, and loss of knowledge about traditional farming methods.
The HIV/AIDS and gender component of the Agricultural Research and Development Support Facility funded by AusAID is one of the avenues that could be used to bring together all stakeholders to address the epidemic collectively.
This also presents an opportunity to review and revise R&D programmes and design interventions to address and mitigate the impact of HIV/AIDS.
This is the time to start thinking and acting seriously about integrating HIV/AIDS in agricultural R&D programmes.
The task looks more complex than many may think and it is important for the agriculture sector to act now.
Posted by Malum Nalu at 7/26/2010 07:06:00 PM