Greater partnerships and dialogue needed for tangible development and progress 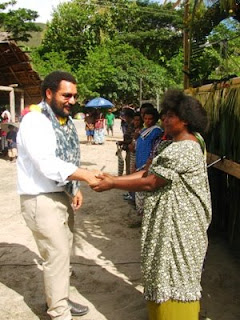 Caption: Minister Pundari receiving a bilum from the women of Bangalum in appreciation for attending the launching

Greater partnerships, constructive dialogue and honest discussions were the key messages given to the people of Mumeng and especially the Middle Watut communities during the launching of a dozer for the Mumeng LLG.

This was given by Mining Minister,  John Pundari to the people who were gathered to witness the occasion including, the Bulolo district administration, Mumeng local level government representatives,  people of Middle Watut and union president, Rueben Mete,  were gathered at Bangalum to witness the launching yesterday.

The minister was responding to calls from Mete regarding sedimentation issues affecting the Watut River and potential litigation action against the Hidden Valley Mine by the Bulolo District.

Pundari told the people gathered that there was nothing wrong with serving the interests and fighting for the needs of the people where genuine national interest was concerned.

"Taking up a cause for the interests of communities is an honourable thing to do provided our intentions are genuine – but also taking into consideration that we need to sit down with concerned stakeholders and consider what the bigger picture is," he said.

The minister's comments were made following similar sentiments raised by Bulolo MP Sam Basil for more community consultation to forge a better and more-constructive path forward that would ultimately be decided by the people whether or not to pursue litigation or opt for infrastructure project developments.

Based on these sentiments, Pundari committed to meeting with 10 representatives, comprising five from the Watut union, five from the Mumeng LLG, including acting Bulolo district administrator, Tae Guambalek, Bulolo MP Sam Basil, Morobe Governor Luther Wenge and MMJV representatives to meet with Mineral Resources Authority, Department of Environment and Conservation and the minister in Port Moresby on May 11.

"Bearing in mind that projects like these come with sacrifice, we need to be able to sit down and face up to each other and these concerns in order find the right answers," Pundari said.

"It is our responsibility as the regulators to ensure that we are minimising the impacts to the extent that our people's livelihoods are not impacted and at the same time so that the operators of projects such as the Hidden Valley mine can operate without disruption in order for all of us to enjoy and maximise the benefits that projects of this scale can bring.

"Yes, there will be issues, yes there will be obstacles, but there are ways of overcoming them and that is what we should be focusing on as responsible leaders with the heart for our people and this country."

The planned meeting in Port Moresby will enable all key stakeholders to convene at a proper forum and "get the facts straight" regarding the Watut River concerns of sedimentation that have been raised in the media recently in order to find a better path to progress.