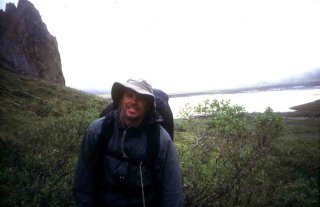 On the trail of the "Ghost Mountain Battalion"

A forgotten World War 11 trail used by American troops in Papua New Guinea will be the subject of a book and a television documentary in 2006.

This trail – like the Black Cat and Bulldog Trails in Morobe Province – played an equal, if not more significant role, than the Kokoda Trail but has now taken the backseat.

The trail, between Gaba Gaba in the Central Province and Buna in the Oro Province, is a march that military historians have called "one of the cruelest in military history”.
James Campbell (pictured above) is an author currently under contract to write a book of non-fiction set in PNG for Random House/Crown Books.

The book concerns a group of National Guardsmen - the Ghost Mountain Battalion - who fought the Japanese at Buna, PNG, during WW II.

It took the men 42 days to cover the 120 miles, and when they reached Buna, they were a shattered unit, ridden with malaria, dengue fever, dysentery, jungle rot, and scrub typhus.

This summer (April/May 2006) author-adventurer Campbell, who chronicled the life of one of Arctic Alaska’s last wilderness families in his award-winning book, The Final Frontiersman: Heimo Korth and His Family, Alone in Alaska's Arctic Wilderness (Simon & Schuster/Crown Books), will repeat the epic trek that Sergeant Paul R. Lutjens describes in his journal, a march that military historians have called "one of the cruelest in military history”.

The entire trail has not been hiked since the men of Company E did it in 1942.

Campbell's book about the experience and the ensuing battle - an ordeal that has been largely forgotten by history - tentatively titled The Ghost Mountain Boys: Across New Guinea with WW II’s Heroic 2nd Battalion, will be published by Random House/Crown Books in January 2007.

The 2nd Battalion, of which Company E was part, was assigned the most grueling mission of the entire Southwest Pacific campaign: to march from Papuan Peninsula's south coast to its north coast, a straight-line distance of only 150 miles.

What lay between the men of the 2nd Battalion and the north coast, though, was a no-man’s land of some of the most inhospitable terrain on earth.

Its route north led the men through thick jungle, over the rugged, mist-shrouded Owen Stanley Range and back down through more jungle and lowland swamps with fetid, chest-high water.

It took the men of Company E 42 days to cover the 150 miles, and when they reached the north coast, they were a shattered unit, exhausted and starving, ridden with malaria, dengue fever, dysentery, jungle rot, and scrub typhus.

Nevertheless, General MacArthur sent them directly into battle.
In its struggle to reach Buna, the Ghost Mountain Battalion was assisted by a large group of Papua New Guineans, who served an indispensable role as guides and carriers.

Later, these same men - men from villages all over the Papuan Peninsula (especially from Gaba Gaba and Buna) - served as scouts and litter bearers, carrying wounded American GIs from the battlefield to portable hospitals and to the airstrip at Doboduru for transport to Port Moresby.

The Australians on the Kokoda Trail called these men "fuzzy wuzzy angels”.
The American soldiers referred to them simply as their "saviors”.

“The trail, I think, will draw American tourists to PNG and trekkers in general, especially those who, having done the Kokoda, are searching for another challenge,” Campbell told me.

“I also think that the trail will be great for rural development, doing for the villages along the route what the Kokoda Track has done for Uberi, Efogi, and especially Kokoda.

“Both seem very excited about the prospects.

“However, my grand vision for the trail extends far beyond the boundaries of Gaba Gaba and Buna.

“My idea is to allow people to recover from the trials of the trail in the lovely village of Buna and then to encourage them to head south, following the path that led the U.S. Army north.

“A list of other historically significant sites would include Pongani, Oro Bay, Tufi, Wanigela, and Milne Bay.”

In April/May 2006, Campbell and his team will retrace the trek of the Ghost Mountain Battalion.

He will be accompanied by a talented team of documentary filmmakers, which is currently negotiating with the History, Discovery and National Geographic Channels to distribute the film of their journey across PNG.

He will also be doing weekly dispatches from the trail for National Public Radio and is now exploring the possibility of doing daily computer dispatches from the trail, which will be transmitted to schools across the world, bringing the story of the WW II battle for Papua and that of modern day Papua New Guinea to people who know every little about either.

Campbell will also be setting up an expedition website.

Finally, his agent will be negotiating with a major magazine in which the book will be excerpted prior to publication.
Posted by Malum Nalu at 5/24/2006 02:38:00 PM No comments:

Mother’s Day last Sunday may have been a memorable moment for many mothers all over Papua New Guinea and the world, a day on which their children and husbands showered them with gifts and expressions of love.
But for many others, life went on as usual; a day of toil and tears on what should have been an otherwise happy day.
Such was the case with two wonderful mothers I met in Ward 9 of the Port Moresby General Hospital last Sunday.
The story begins last Friday night when my wife had a tragic miscarriage and had to be admitted to Ward 9 of the POMGH.
What made this particularly heartbreaking for both of us was that it happened two days before Mother’s Day, and the discovery that the three-month old was a son.
Needless to say, tears fell freely for both of us as we thought about what could have been.
My wife spent the whole of Saturday in hospital and late in the afternoon underwent minor surgery as I paced anxiously up and down the corridors of the Labour Ward.
I needn’t have worried as she was well taken care of by very-experienced doctors and nurses and came out without a scratch.
I spent Saturday night with my wife in Ward 9, amidst the weeping and wailing of women, and during the course of the evening struck up an acquaintance with two women sharing the same room.
Helen Paul, from Garaina in the Morobe Province, would undergo major surgery a few days later.
Helen, who lives at Morata with her husband and children, however, had a great personality and sense of humour that kept us awake for most of the night.
Next to Helen was Regina Komae, from Kunimaipa in the Goilala area of Central Province, who was looking after her very sick 25-year-old daughter Lucy.
Lucy, I gathered from her mother, had started becoming sick almost two years ago after giving birth to a daughter in Tapini.
Regina told me that that Lucy had been in and out of hospital since then – including undergoing major surgery - and it had utterly exhausted them: physically, mentally and financially.
Life has not been kind to them in a city like Port Moresby, and they had become settlement dwellers, but Regina’s Christian faith keeps her hanging on.
In all honesty, Lucy, with her skeletal frame, did not look like she had much time in her and this was confirmed by her mother.
“I have five children, of whom Lucy is the eldest,” Regina told me.
“I could desert her and leave her alone here, but I love her so much.
“I am her mother and she is my daughter.”
Early last Sunday morning, as my wife and I were packing up to leave, a young student doctor at the nearby Medical Faculty came around with flowers and a wish for all the mothers on their special day.
I had my digital camera with me and was happily taking pictures of my wife – for old time’s sake – when Regina, with tears in her eyes, approached me.
“My brother,” she told me, “could you take a picture of Lucy and me on Mother’s Day?
“We have never had a picture together.”
Tears continued to flow freely down Regina’s eyes as I took a picture of her and her very sick daughter.

It was the epitome of a mother’s never-ending love for her child, come what may.
She later confessed: “This will probably be our last picture together.”
My wife and I then left, with a “Happy Mother’s Day” wish to Regina and Lucy, not forgetting Helen, and a promise to bring them the pictures once I had printed them.
Outside, Mother’s Day commercialism was in the air, with jingles on radio and big banners outside the supermarkets.
At home, lots of hugs and kisses from our three children, although we felt that there wasn’t much to celebrate after our experience in Ward 9 of the POMGH.
How many Reginas and Lucys, and Helens, are there out there?
Posted by Malum Nalu at 5/18/2006 04:36:00 PM No comments:

Email ThisBlogThis!Share to TwitterShare to FacebookShare to Pinterest
Hello my name is MALUM NALU and I am from PORT MORESBY, PAPUA NEW GUINEA.

My blog has been set up especially to promote Papua New Guinea and what it has on offer.

In this blog, you'll find relevant, up-to-date information about and Papua New Guinea in general.

I have worked as a journalist for several years in Papua New Guinea and have vast working experience in the country as well as extensive knowledge of it.

You'll read some of the features I have written over the years, plus new ones, garnished with a selection of breath-taking pictures.

Your feedback is most welcome. 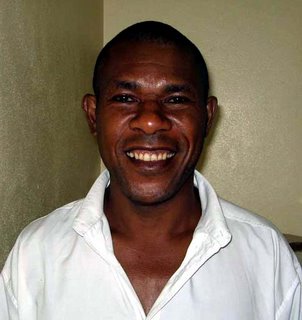