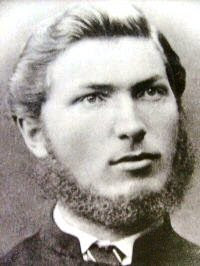 The dawn of the Lutheran Christian faith in Papua New Guinea came on July 12, 1886, through Johann Flierl when he sailed into the quiet beaches of Simbang in Finschhafen, Morobe province.

God instilled the courage, the wisdom, the strength, and the perseverance into the life of pioneer German missionary, Rev Johann Flierl.

Simbang, a village at the mouth of the Bubui (Mape) River in Langemak Bay was the first site of the first mission station.

In 1890, he moved the mission station from Simbang to a nearby hill called Gaigeresa that was also known as Simbang II.

That same year (1886), Johann Flierl was joined by Karl Tremel in and they moved into Simbang village to set up the first mission station.

In 1888, Mrs Louise A Flierl later joined her husband at Simbang, Finschhafen.

At that time it was known as German New Guinea - Kaiser-Wilhelmsland.

All the above mentioned missionaries that came to this newly-found mission field and established the mission stations also came with their spouses.

As this famous saying goes, behind a great man, there is a great woman, so in the case of these early missionaries who came to our land, their wives accompanied them and endured the life of being a missionary's wife taking very good care of their missionary husbands.

The first mission station was established in Simbang, October 8, 1886.

The second mission station was established on Tami Island, November 1889.

The missionaries that were assigned to establish it were Rev Karl Tremel and Rev Georg Bamler.

The third mission station was established at Sattelberg with careful planning and proper preparations.

Toward the end of 1892, the missionaries and their families moved into the newly-established mission station.

In 1899 the fourth mission station was established at Deinzerhill through the initiative of Rev Georg Bamler, at Tamigidu in the Bukawa area.

On the opposite side of the Huon Gulf, missionaries Karl Mailaender and Hermann Boettger established Malaclo mission station in 1907.

In 1907, two new mission stations were established, one at Malaclo and Sialum respectively.

After 13 long harsh years of tough missionary work in the northern coast of Morobe province of what is now known as the Finschhafen district, in 1899 the first baptism took place in Simbang.

These gentlemen became the first fruits of what would determine the destiny of a Christian church in this nation, Papua New Guinea.

In the next five years,  36 more people from Tami Island and from the nearby coastal villages of Simbang were added to their number.