Agriculture Minister Tommy Tomscoll has showed that he is one who practices what he preaches by growing, producing, and exporting his own brand of coffee.
Tomscoll, his wife, and children attracted a large crowd at Gateway Hotel on Sunday, September 21,  when they showcased their brand-new product, Simbai Coffee, which is premium organic coffee from this remote part of Madang which borders Jiwaka and Enga provinces.

The occasion was the launching of the weeklong inaugural PNG Coffee Growers’ Cupping Competition at Gateway Hotel which is being attended by smallholder coffee growers from throughout the country as well as international coffee tasters.
“I’m a coffee and cocoa farmer and exporter as well,” Tomscoll said,
“Simbai Coffee is grown by the people of Kalam tribe, who all live in Simbai, on the border with Jimi in Jiwaka and Kompiam in Enga.
“Simbai people live along the border, and this is the coffee we grow organically, on family blocks, and then sell.”
Tomscoll said only coffee grown in Simbai was used to produce Simbai Coffee to maintain its originality and premium.
Selected beans are then bagged and airlifted by light aircraft on the short 20-minute flight to Mt Hagen where it is processed and mixed with other beans for flavor, and then exported
He said he only started producing Simbai Coffee about three months ago.
“We grow coffee, and we also buy coffee from all our farmers, which is then converted into green bean using our new machine, and then turned into ground coffee.
“Our first market is in Cairns.”
Tomscoll said he also grew and exported cocoa out of Madang.
“We might also go into oil palm soon,” he said.
Tomscoll’s wife and children also took part in the week-long cupping competition where they showcasde their very own Simbai Coffee.
Posted by Malum Nalu at 9/30/2014 09:56:00 AM No comments:


Kandep MP and Triumph Heritage Empowerment (THE) Party leader Don Polye on Sunday confirmed that his is now in the Oppsition ranks.
He confirmed this to reporters at a press conference he held on Sunday but declined to comment on whether on he wanted to take up the position of Opposition Leader. 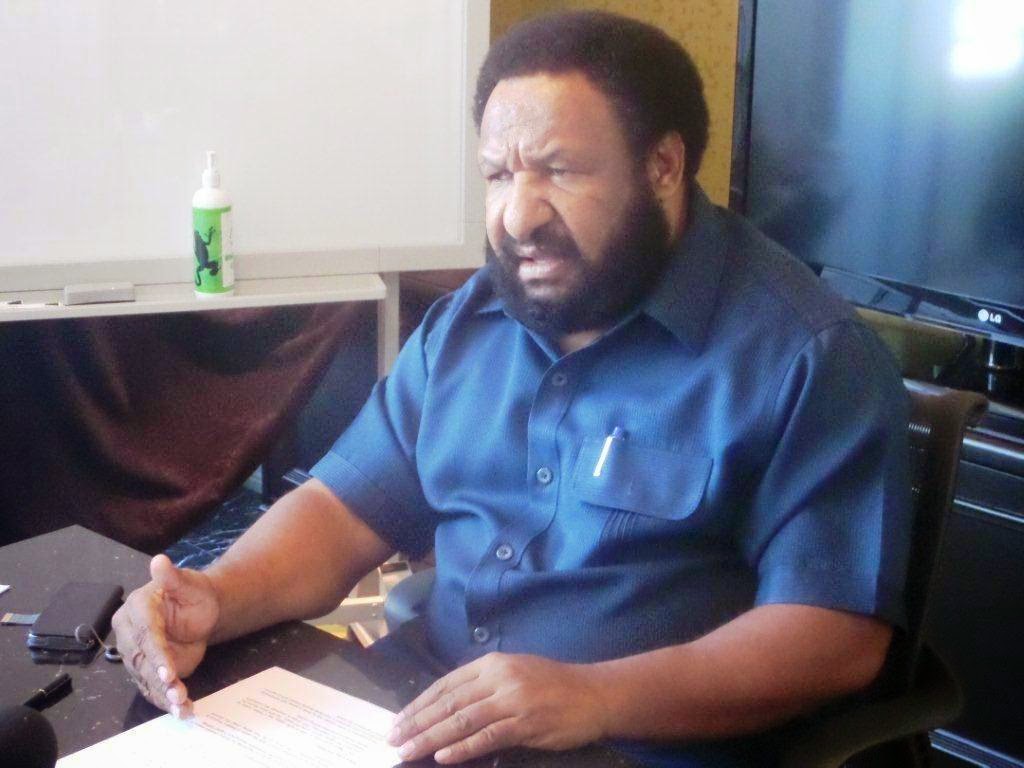 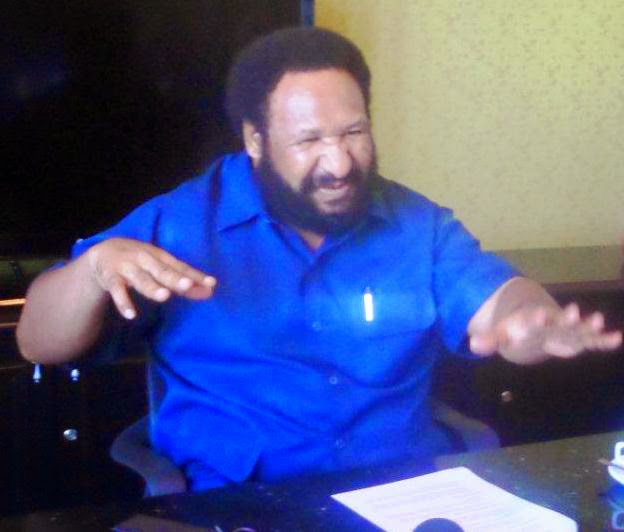 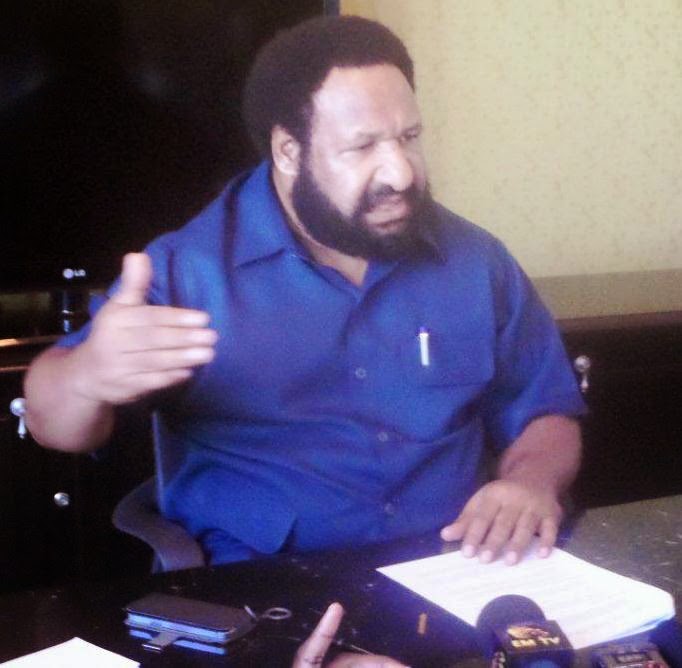 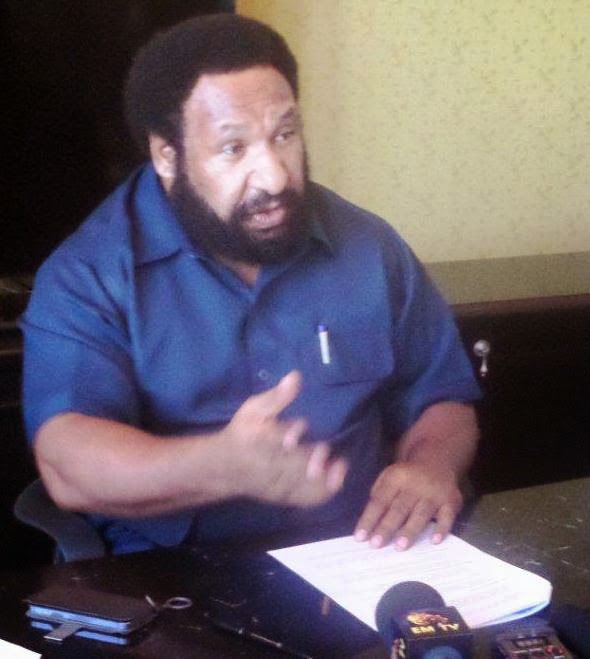 “That’s not an issue,” he said of the Opposition Leader’s position.
“Why are people making this as an issue?
“The issue is economic management and the conduct of the Prime Minister.”
He maintained that THE Party was intact despite several of its MPs, including Deputy Prime Minister Leo Dion, leaving en masse for Prime Minister Peter O’Neill’s ruling People’s National Congress.
“Look at the Organic Law on Intergrity of Political Parties and Candidates (OLIPPAC),” Polye said.
“It says that the party constitution regulates MPs and other members.
“The constitution says that if you want to resign from THE Party and join another party, you have to give your reasons to THE Party council.
“THE Party council determines that and says, ‘OK, we’re releasing you, you can join another party’.
“In this case, none of these people (who joined PNC), have written any letter.
“I only find out in the newspapers that m MPs have joined the PNC Party.
“These MPs are technically and legally still members of THE Party.”
Posted by Malum Nalu at 9/30/2014 08:55:00 AM No comments:


Agriculture Minister Tommy Tomscoll says growing and harvesting coffee remains the best opportunity for smallholder rural farmers to work their way out of poverty.
He said this at the awards night for the week-long inaugural PNG Coffee Growers’ Cupping competition in Port Moresby on Friday.


Tomscoll said the government had already provided assistance through freight subsidies, establishment of district nurseries and seed gardens, increasing quality assurance programmes, and undertaking partnership with the World Bank.
“From early this week, the government sponsored the first international cupping quest staged in Papua New Guinea,” he said.
“This quest has facilitated communication and education between farmers, and farmers and exporters, measured the quality of coffee beans, and most importantly, put monetary value to the cup of coffee.
“It is during cupping quest that new alliances, networks, and business opportunities are founded.


“The government believes that through the distribution of new coffee seeds for planting, it should lead directly to increased production, should bring new income, and create new employment for the unemployed youths and rural people.
“Coffee farming is the most-powerful lever for reducing hunger and poverty, and improving quality of lifestyle for our people.”
Tomscoll to “think global, acting local” by planting coffee gardens in small family sizes.
“When we depart from here after tonight, I want us to go away having belief in ourselves that we are collectively the future of the coffee industry.
“We will plant coffee gardens in small family size – and we will think big – and as individual families we will act local.
“As families acting together, and collectively, we will create a global business inspired by the idea of family farming and district marketing.”
Posted by Malum Nalu at 9/30/2014 08:37:00 AM No comments:

PNG coffee to be promoted at all airports


Coffee Industry Corporation and National Airports Corporation have entered into a deal to promote Papua New Guinea coffee at all major airports in the country.
The deal was signed by acting CIC chief executive Anton Benjamin and NAC CEO Joseph Tupiri at the awards night of the inaugural PNG Coffee Growers’ Cupping Competition in Port Moresby on Friday.

Okapa has best coffee in PNG


Remote Okapa in Eastern Highlands has been rated as having the best coffee in Papua New Guinea.
Okapa’s Kanite Kirapim Association won the top accolade at the inaugural PNG Coffee Growers’

Cupping Competition awards night in Port Moresby on Friday after a hectic week of tasting 69 coffee samples from all over the country by an expert panel of five international and one local taster.

The tasters, who had to taste over 700 cups last week, were Marichi Clarke, Juliana Nobre and KC Reynolds from Australia, Adi Taroepratzeka and Ulden Banu from Indonesia, and Rose Romalus from PNG’s Coffee Industry Corporation.

Hundreds of people including coffee growers, family members, and supporters of the industry packed the Gateway Hotel for the awards night.
Jonah Anagoh, who picked up the award for Okapa, said winning would certainly place this remote part of Eastern Highlands on the world map.
“We have come all the way from Okapa with our extension officers,” he said.
“It is a great honor to win this first-ever type of award for the coffee industry in PNG.
“I’m so happy for us people of Okapa to be recognised like this.
“We Okapa people are ‘bush’ people who work very hard in looking after our coffee.
“We are so proud that our coffee has been recognised as being the best in the country.
“I urge all coffee farmers in Okapa to continue working hard and to maintain the quality that we are renowned for.”
Reynolds, on behalf of the tasters, said they had discovered some “very beautiful coffees” during the week.
“We had a big task all week of tasting all 69 coffees and getting acquainted with the best of PNG coffee” she said.
“In total, we brewed and tasted 730 cups of coffee.
“As cuppers, our main focus is cup quality.”
Reynolds advised quality could be improved by not picking under-ripe cherry, drying properly, and proper fermentation.
However, she said they had discovered some “very great flavors”, which showed the quality of PNG coffee.

“We found flavors of blueberry, wine, dark chocolate, cherry, milk, candy, melon, honey, lime, caramel, apple, grape, apricot, hazel nut, guava, hibiscus, mango, jelly, turmeric, and many, many more flavors,” Reynolds.
“This week, we not only had the chance to cup the coffee of PNG, we also had the chance to meet the people behind the coffee.”
Posted by Malum Nalu at 9/30/2014 07:47:00 AM No comments: