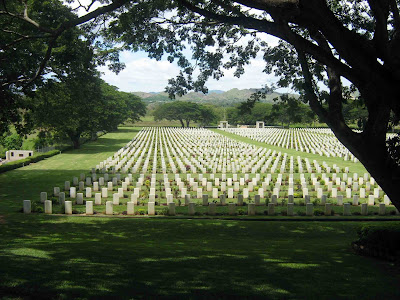 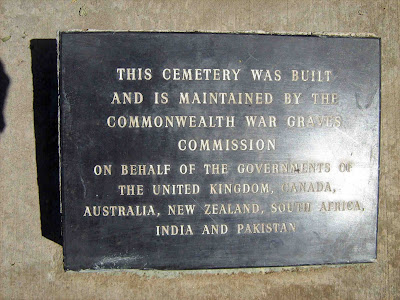 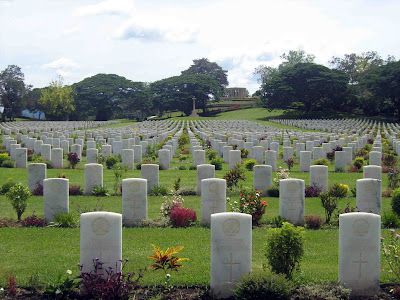 Bomana never fails to move you

“I visited Bomana War Cemetery, not far from the start of the Kokoda Track, in Papua New Guinea in 1973 when I was 21,” wrote the author of the above poem.

“The peace of the setting and the enormous number of white crosses shocked me with the contrast.

“It was here that I began to grasp the sacrifice made by those who give their lives for their country.”

Bomana War Cemetery, just outside of Port Moresby, respects and honors those who made the supreme sacrifice for their people.

It also serves as a reminder that war kills, not just a few, but many hundreds of thousands, and on both sides.

Bomana – like other war cemeteries in Papua New Guinea – offers an opportunity to create goodwill amongst all the living so that the same tragedies may not be repeated.

It creates strong feelings of sacredness, tranquility, spaciousness, peace and beauty, and is immaculately maintained by devoted staff.

Bomana is not far from the start of the Kokoda Trail.

The peace of the setting and the enormous number of white crosses shocks you with the contrast.

It is here that you begin to grasp the sacrifice made by those who gave their lives for their country.

Port Moresby (Bomana) War Cemetery lies approximately 19km north of Port Moresby on the road to Nine-Mile, and is approached from the main road by a short side road called Pilgrims Way.

After the Japanese landed at Lae and Salamaua in March 1942, Port Moresby became their chief objective.

They decided to attack by sea, and assembled an amphibious expedition for the purpose, which set out early in May, but they were intercepted and heavily defeated by American air and naval forces in the Coral Sea, and what remained of the Japanese expedition returned to Rabaul.

After this defeat they decided to advance on Port Moresby overland and the attack was launched from Buna and Gona in September 1942.

Early in 1942, and almost without resistance, the Japanese established a considerable force and developed a useful base on Bougainville, the largest and most northerly of the Solomon Islands.

This they held until Americans and Australians began offensive operations towards the end of 1943, when Bougainville was the only one of these islands remaining in Japanese hands.

By August 1945, when the Japanese surrendered, most of the island had been recovered.

Those who died in the fighting in Papua and Bougainville are buried at Bomana War Cemetery, their graves brought in by the Australian Army Graves Service from burial grounds in the areas where the fighting had taken place.

The unidentified soldiers of the United Kingdom forces were all from the Royal Artillery, captured by the Japanese at the fall of Singapore; they died in captivity and were buried on the island of Bailale in the Solomons.

These men were later re-buried in a temporary war cemetery at Torokina on Bougainville Island before being transferred to their permanent resting place at Port Moresby.

The cemetery contains 3,819 Commonwealth burials of the Second World War, 702 of them unidentified.

The Port Moresby Memorial stands behind the cemetery and commemorates almost 750 men of the Australian Army (including Papua and New Guinea local forces), the Australian Merchant Navy and the Royal Australian Air Force who lost their lives in the operations in Papua and who have no known graves.

Men of the Royal Australian Navy who died in the south-west Pacific region, and have no known grave but the sea, are commemorated on the Plymouth Naval Memorial in England, along with many of their comrades of the Royal Navy and of other Commonwealth Naval Forces.

Bougainville casualties who have no known graves are commemorated on a memorial at Suva, Fiji

A driveway lined with shady trees, flowering shrubs and lawns leads from the main gate to the car park where there is an overall view of the cemetery.

Among these are 438 unidentified soldiers of the United Kingdom Forces captured at the fall of Singapore, who died in captivity in the Solomons.

At the far end lies the Remembrance Stone of richly – grained pink sandstone.

Slightly to the right, on a knoll stretching its arms over all the graves, stands the Cross of Sacrifice.

The Memorial is higher up to the right on top of the hill dominating everything.

A rotunda of cylindrical pillars encloses a circle of square columns.

Their inside faces bear bronze panels engraved with over 800 names of men who lost their lives in operations in Papua and who have no known graves.
Posted by Malum Nalu at 6/12/2008 09:30:00 AM

Email ThisBlogThis!Share to TwitterShare to FacebookShare to Pinterest
Labels: bomana