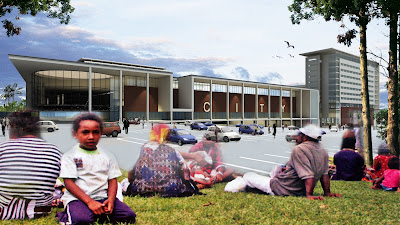 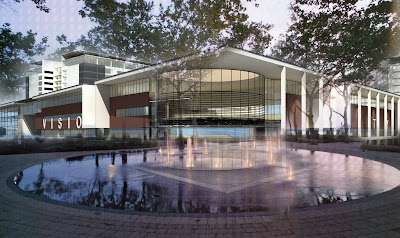 THE Rimbunan Hijau (PNG) Group is undertaking the most ambitious commercial property development ever undertaken in the country at an estimated cost of K1 billion.

Named Vision City, the proposed multi-user complex will incorporate a three-storey megamall, a 12-storey hotel with more than 290 rooms, a twin-tower office block, a convention centre and about 120 serviced apartments.

It is located on a 9.2 hectare site fronted by Waigani Drive and Sir John Guise Stadium.

Vision City will create a new focal point for shopping and business in addition to Boroko, the downtown area and Harbour City.

The master plan for the spectacular project, to be undertaken by the RH Group’s property subsidiary, Dynasty Development Ltd, has been approved by the National Capital District Commission and a ground-breaking ceremony will be held on Tuesday, June 17, 2008.

Work will begin first with the shopping mall which will take about a year and a half to complete.

Besides a large hypermart and department store, the megamall will feature more than 50 retail outlets.

The entire project is expected to take between seven and 10 years and will create about 1,800 jobs at the peak of construction.

“Once Vision City is completed we expect that about 5,000 people will be employed or accommodated within this vast complex that will virtually represent a city within a city,” said RH managing director James Lau.

“It will be home to some 250 business entities and be responsible for generation of business activities worth K200 million to K250 million a year.

“This and other projects being undertaken in Harbour City and in the downtown area are destined to turn Port Moresby into one of the most dynamic and vibrant cities in the South Pacific.

According to Dynasty, the mini-city complex will have a floor area of 150,000 sq metres or more than seven times the floor space in the 19-storey Deloitte Tower.

The 33,000 sqm shopping mall alone will increase Port Moresby’s current shopping floor area by more than 20% and generate around 1,200 jobs.

Similarly the hotel, which will be managed by an international chain, will be the largest in the city.

The twin 10-storey office blocks will be built in two phases.

On completion they will boost the available office area by 60,000 sq m, about three times more than the space available in Deloitte Tower.

“This project will only be successful if the PNG economy continues to experience strong growth and we are confident that initiatives undertaken by the present government in recent years will ensure a healthy climate will prevail for private sector investment and growth,” he said.

“The extremely strong growth in employment in the past two years is one of the factors that make us confident that a visionary project of this scale can be a commercial success by providing many more world-class amenities for public use.

The complex will incorporate various high-tech features to take care of growing concerns about greenhouse effects and climate change.

The hotel, for example, will employ sun-shading devices to maximise natural ventilation and natural lighting and an “external skin of steel mesh over part of the façade” will reduce power requirements.

The landscaped courtyard for the serviced apartments will also allow for better cross ventilation and improved entry of natural sunlight.

There will be 2,600 parking lots, with a third of them under cover.