I found this story so heartwarming and relevant to Papua New Guinea where potholes are an everyday nightmare, costing millions of kina, and people waiting for the government to do everything. Here, an ordinary citizen known to the community as "the Robin Hood of potholes", works under cover of darkness to fill up potholes in Jackson, Missisipi, USA.PNG needs a superhero likes this..Malum

Jackson, Mississippi's longstanding and widespread pothole problem is finally getting fixed. Not by the city, mind you, but by an ordinary citizen known to the community as "the Robin Hood of potholes."
The "rogue road worker," as the Clarion Ledger calls him, is actually a mild-mannered screenprinter named Ron Chane.
On at least five separate occasions, Chane, who also goes by "The Pothole Patchman," has taken to the so-called "Six Flags streets" of Jackson under the cover of darkness armed with buckets of asphalt and a sense of civic duty. 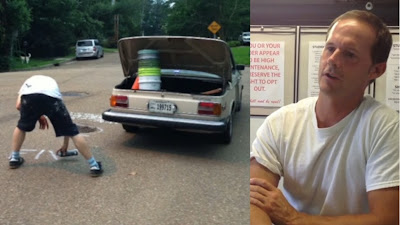 According to Chane, he has filled over 100 potholes so far, leaving his mark behind like all good superheroes in the form of a spray-painted message that reads "citizen fixed."
Chane's selfless efforts to fix the city's bumpy infrastructure have been met with approval from other residents who say the city is simply too backed up and underfunded to fix the problem itself.
But the city sees Chane's unsolicited assistance as its problem: He's taking city asphalt without permission.
The source of Chane's pothole filling is a "large mound of road-building material" located near State Street.
"We do not accept any use of the city's resources without going through the proper legal channels," Jackson's newly elected mayor Chokwe Lumumba said in a statement.
But Chane insists he's just "putting [the asphalt] back where it belongs."
"I’m probably stealing from the city, but there’s not a sign saying ‘Don’t take this and put it in potholes," he said.
The 43-year-old hopes his actions will prompt the mayor to act aggressively against the pothole problem, but says the flip side of his mission is to let citizens know that "you have to sometimes take matters in your hands, in a creative and constructive way."
"Hopefully someone else will come behind me," he said. "I don't want to do the city's work forever."
Posted by Malum Nalu at 7/13/2013 09:09:00 AM