Commanders thought anti-Semitism kept him from Medal of Honor

Did the American government refuse to honor a World War II veteran who was regarded as a war hero by the British Empire, because he was Jewish?
The question apparently still lingered in David Rubitsky’s mind when he died, penniless, June 28 at a nursing home in East Moline, Ill., the local Quad-City Times reported.
Rubitsky’s commanders claim he single-handedly killed 500 to 600 Japanese soldiers while guarding a military outpost in Papua New Guinea during the Battle of Buna in December 1942. 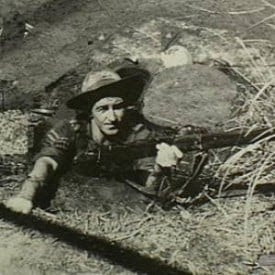 According to Rubitsky’s account, he defended the bunker with a 30-cal. machine gun, a .45-cal. pistol, a rifle and grenades.
In a WND column in 2001, WND CEO and Editor Joseph Farah told Rubitsky’s story when the veteran was still lobbying for a Medal of Honor:

Rubitsky spent a total of 21 hours in the bunker — including nine under heavy siege. The Japanese army attacked from three different directions — the north, south and west. His bunker had slits on all sides, making it possible for him to respond to an attack from any direction. He switched from gun to gun and threw grenades at the enemy, while the Japanese alternately charged his position and shelled it with light artillery.
When the fighting was over, Rubitsky was bleeding from the mouth, nose and elsewhere and suffering from multiple concussions from the shelling. But the Japanese were a lot worse off.
Rubitsky was invited in 2001 to Buckingham Palace to receive a decree, signed by the queen, naming him an honorary Member of the British Empire after the government of Papua New Guinea commissioned a historian who concluded Rubitsky was telling the truth.
Rubitsky’s company commander, Capt. Joseph M. Stehling, recommended Rubitsky for the Medal of Honor after surveying the battle site. The recommendation reached battalion commander Lt. Col. Herbert A. Smith, who passed it on to Col. John W. Mott, the division’s chief of staff.
According to Smith, Mott said, “You mean a Jew for the Congressional Medal of Honor?”
Mott then laughed and walked away, Smith said.
Farah noted in his column that Rubitsky considered his Medal of Honor effort to be a matter of principle.
“What really matters is why I didn’t get the medal,” he said. “I’m doing it for the principle and the truth, not the medal and not the money. It’s for every man, whether black, green, or purple. If he wears the uniform, he should get what’s coming to him. He shouldn’t have to fight for it.”
In 1986, when Rubitsky’s former commanders discovered he had not been awarded the medal, they got several lawmakers and the Anti-Defamation League to take up the cause.
After an investigation, however, the U.S. Army announced in 1989 there was insufficient evidence to support Rubitsky’s claim.
Nevertheless, Rubitsky’s son, Dennis, said his father told him, “If you ever went to New Guinea and said you’re a Rubitsky, they’d treat you like a king.”
Dennis Rubitsky said a movie was going to be made about his father, with Kirk Douglas playing him and Douglas’ son playing him as a younger man, but Kirk Douglas became ill and the project was halted.
“Steven Spielberg wanted to buy the rights to the movie, but that didn’t happen. At this point, I don’t know whether that movie ever will be made,” he told the Quad-City Times.
“The only thing he was disappointed about was not getting the Medal of Honor from his own country.
Posted by Malum Nalu at 7/03/2013 04:51:00 PM