The mv Octopus owned by billionaire Paul Allen, co-founder of Microsoft sailed into Madang over Easter. 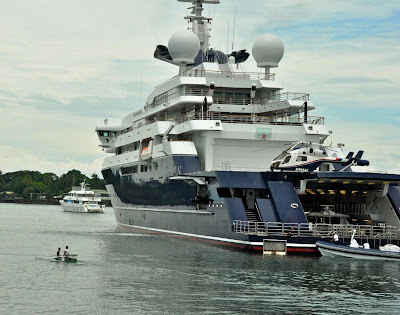 mv Octopus is 126m, almost 3, 000 tonnes, costs US$200 million and travels around the world for the owner and his friends.
Paul Allen, reported to be the third-wealthiest man in the USA and 12th in the world called into Madang for diving with Skita Libido from the Madang Resort.
The picture shows the garage housing a submarine, catamaran, numerous tenders and jet skis.
It also carried two helicopters which have their own hangar and the ship is staffed by 60 including two US ex Seals.
The Kalibobo Spirit and Madang Resort can be seen in the background.-Picture by SIBONA MANI
Posted by Malum Nalu at 4/10/2012 12:00:00 AM