Chairman of the National Education Board (NEB) and Acting Secretary for Education Dr Joseph Pagelio has announced that the NEB in a recent meeting recommended that the maximum school fee Limits for the 2011 school year will be the same as for 2010 for all institutions.
He added that the NEB made the decision based on the outcomes of the latest survey Parental School Fees Affordability Study (2009) which ascertained various hardships parents were experiencing; living beyond their means.
The Acting Secretary said that the findings from this research showed that the income earned by parents was far less than the expenditure encountered by families in all sectors.
He added that families in the rural areas were struggling because there were no basic government services provided, besides additional community problems and commitments throughout the year, which heavily affected the families’ savings and subsequently was insufficient to meet both the family needs and to cater for their children’s school fees.
The fee limits for general education are shown in Table 1, Primary Teachers Colleges and PNGEI in Table 2 and Technical and Business Colleges in Table 3. 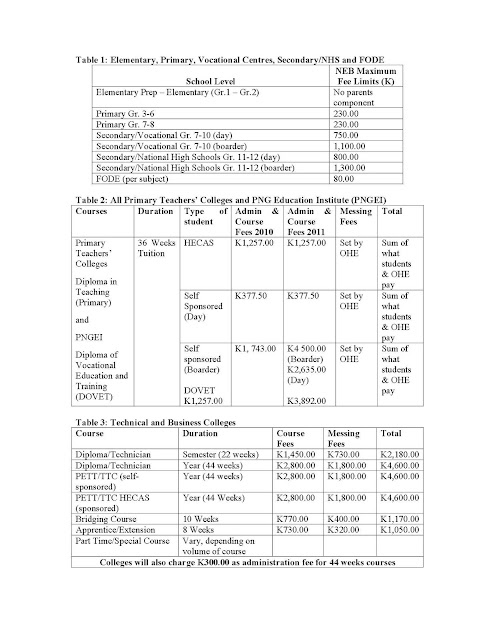 Dr Pagelio said that the NEB set maximum fee limits in order to guide provincial education authorities and Department of Education divisions to set realistic fees.
The 2011 fee limits take into account the need to keep the levied costs on parents as low as possible, but at the same time provide all institutions with sufficient funds to remain operational until the end of the academic year.
He said that school administrations, parents and the school communities need to realise that fees parents struggled to pay were difficult, for but at the same time, institutions and schools needed finance and support to operate at the required standard.
“The NEB maximum fee is an estimate of the average amount per student that each institution needs to budget in order to stay open for the full school year to provide quality education to the learners,” Dr Pagelio said.
“The cost of education is a shared responsibility between parents and guardians, school governing bodies, education agencies, and provincial and national governments.
“To ensure that schools operate effectively, parents are encouraged to start making arrangements to pay fees by the time school commences in 2011.”
Elementary schools have been charging parents fees in the 2010 school year despite clear direction from the Ministry of Education for free elementary education.
Dr Pagelio said a secretary’s circular would be issued to heads of all institutions in the national education system and church agencies, informing them of the 2011 maximum fee limits and a public notice would also be published in the newspapers soon to inform the public, especially parents and guardians to start preparing for their children’s school fees.
Posted by Malum Nalu at 1/19/2011 09:17:00 AM