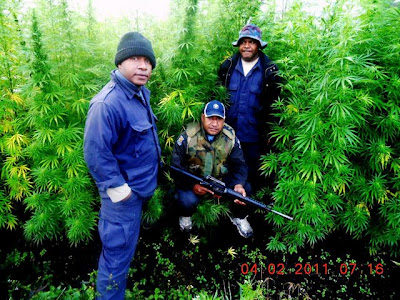 Members of the police mobile squad 11, based in Enga, were among a police unit that raided a marijuana field (pictured) at Apipas village in Wapenamanda early last Friday morning and arrested four people, The National reports.
They uprooted 200 matured plants grown at the back of a house and confiscated 10kg of dried marijuana, neatly packed and stored in the house ready for sale.
Police estimated the drugs’ street value at K300,000.
Police had acted on a tip-off by local leaders.
The marijuana plants were farmed about 30m away from an international school.
Posted by Malum Nalu at 2/07/2011 12:57:00 PM