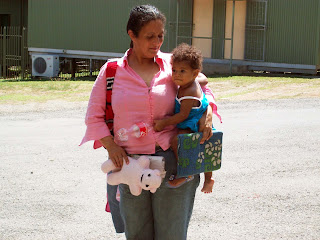 Caption: Tamara Player Tomscoll and her 10 months old prison-born baby Paula outside court yesterday just before boarding a prison van for Bomana. Young Paula has been denied immunisation and other basic health services while inside the prison camp.

TEN-month-old Paula Player Tomscoll is paying the price for the crime her mother Tamara allegedly committed and is now at Bomana jail for – their temporary residence outside , The National reports.

Paula was born on a bare floor of her mother’s Bomana jail cell at 5.05pm on Oct 5 last year, devoid of basic midwifery help because of the mother’s alleged association with bank robber-escapee-rapist William Nanua Kapris.

Mother and child were denied basic medical help which were available to other inmates, a hushed was told yesterday.

Such were the conditions for a new mother that Tomscoll even attempted to take her own life, twice.

“I have given birth to my baby on the bare floor of my cells.

“Water was constantly leaking through the walls, cells infested with mosquitoes and we were prone to suffering from malaria ... there is a high rate of tuberculosis (TB) in the jail.

“There are no medical staff to treat us, or my baby when she is sick.”

Mother Tomscoll, tears streaming down her face, told the court of her traumatised account in the “very small” cell she now calls home: “My daughter still lacks immunisation (which babies normally have access to).”

However, Paula is now her constant “innocent inmate” company in and outside the jail – yesterday they were together, again, at the dock at Waigani as her mother described the unhygienic condition under which they live.

Tomscoll, 33, appeared yesterday charged with being an accomplice of Kapris in the robbery of the Madang branch of Bank South Pacific.

She pleaded guilty to two charges under the Criminal Code – the first was of being an accessory after the fact to a crime of armed robbery of the Madang BSP branch robbery and, the second, of receiving stolen property of K127, 000, proceeds of that bank robbery.

Tomscoll’s guilty plea came after the state told the court that she had known that Kapris was the mastermind behind the Madang robbery and, with that knowledge, she had assisted him to escape punishment.

The court was told that she had provided logistics for his getaway from Domara in Central to Port Moresby, after Kapris had travelled by dinghy from Madang and, also, of receiving monies that were proceeds of that crime.

National Court judge Justice Salatiel Lenalia ordered that there must be a pre-sentencing report of the prisoner presented to court by Aug 31 before he could make a ruling.

The charge of “being an accessory after the fact” carries a two-year jail term while receiving stolen property is punishable by 14 years in jail.

Mother and child will return to the Waigani dock on Aug 31 to hear submissions on sentencing – whether Bomana will be permanent home for the next 14 years.