Wau/Bulolo is not a poor man’s field

A powerful new book on the history of the famous Wau/Bulolo goldfields of Morobe province, to be launched by renowned friend Professor Ross Garnaut at the State Library of New South Wales in on August 19, promises to tell the story of the goldrush as it has never been told before.
Not A Poor Man’s Field (book cover below), by Australian Michael Waterhouse, explores ’s colonial experience in before World War 11 – a unique but little-known period in PNG and Australian history. 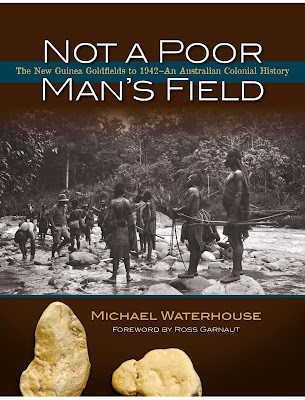 Back in May 2008, Waterhouse (pictured below) corresponded briefly with me about the book he’d written on the Morobe goldfields pre-war, and although things had moved ever so slowly, it is my pleasure to report that the book has finally become a reality. 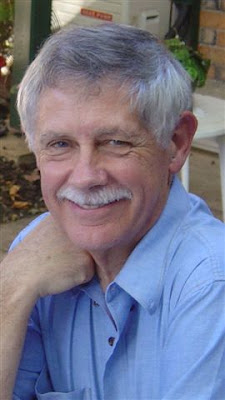 It is a big book of 120,000 words plus end notes, 150 photographs and seven maps and has been financially supported by Barrick, Morobe Mining Joint Ventures, Bank South Pacific, Lihir Gold Ltd and PNG Chamber of Mines and Petroleum.
Waterhouse has close family ties to the pre-war goldfields, his grandfather Leslie Waterhouse having been a pivotal player in their development, as a director of the largest gold-mining company, Bulolo Gold Dredging, and the biggest airline, Guinea Airways.
“My relationship with Wau and Bulolo is through my grandfather, who from his base oversighted the development of BGD’s operations from the time of his first visit in 1929 to his death in 1945, at which time he was planning the resumption of its operations after the war,” he tells The National.
“He travelled there regularly but left day-to-day management in the hands of a general manager.
“He was a director of Placer Development, Bulolo Gold Dredging and Guinea Airways and so was pivotal to much of what happened pre-war.
“I embarked on researching and writing the book after being asked to write an article on him for the Australian Dictionary of Biography.”
First copies of A Poor Man’s Field are expected to arrive in next month for sale at the of , and the PNG launch to will be on October 15 at the in .
Waterhouse and his wife are coming to on October 4, overnight, and then travel on to the fabled Morobe gold towns of Lae, Wau, Bulolo and Salamaua – in a historical tour de force - before returning to for the book launch.
He says that Not A Poor Man’s Field is not simply another “white man’s history” as he explores the experience of villagers and indentured labourers as best as he can in the absence of written records.
“For the record,” Waterhouse expounds, “while the sub-title refers to it being an ‘Australian colonial history’, this is because the main market is in and the book has to be positioned as ‘Australian history’ to be commercially-viable.
“However, I’ve gone to considerable lengths to bring a New Guineans perspective to the history.
“This is not simply another ‘white man’s history’.
“I do feel strongly about this – it is your country’s history as well, and I’ll make this point at every opportunity.”
Not A Poor Man’s Field is a dramatic account of small miners, an extraordinarily rich gold discovery, visionaries and the construction of giant dredges, power stations and townships in a remote jungle area
It is also the story of how risk-taking pilots, flying aeroplanes ranging from single-engine plywood biplanes to large Junkers G31 freighters, opened up an otherwise impenetrable country.
led the world in commercial aviation throughout the 1930s; world records were often set and as often broken.
The book discusses early encounters between villagers and Europeans from both white and black perspectives, as well as the indentured labour system which drew New Guineans to the goldfields from all over the country.
Other themes include the camaraderie of white settlers in an alien environment, race relations in a colonial society, the ineffectiveness of ’s administration of under a mandate and the Japanese invasion and its consequences.
The book takes a multi-disciplinary approach, analysing the colonial experience from economic, social, ethnographic and political/administrative perspectives.
It also conveys a compelling sense of time and place by extensively quoting participants, both black and white, and through the judicious selection of old photographs.
The result is a portrait of unforgettable contrasts.

Not A Poor Man’s Field takes its name from the Administrator of New Guinea, Brigadier General Evan Wisdom, who when trying to discourage Australians rushing to the goldfields in 1926, wrote: “A poor man’s field in Australia is understood to be a field to which a man without anything can go with his swag and live by the gold he gets from the field; he is not dependent on anyone helping him. He can go out with a swag and a tin of ‘dog’ and get enough gold to keep him going. But you must have natives here to help you, and money to pay them, money to carry you there, and on when you get there; therefore it is not a poor man’s field.”
The title conveys a sense of why this goldfield was so different to any other and encapsulates a theme that re-emerges throughout the book and prevails to this day.
The author decided to write this book after being asked to write an article about his grandfather, Leslie Waterhouse, for the Australian Dictionary of Biography.
He soon realised that he was uncovering, layer by layer, the dramatic story of a little-known period in Australia’s and PNG’s history, one largely obscured by the passage of time and the destruction of records by the Japanese during WW11.
“Many Australian publishers have a view that ‘books on Papua New don’t sell’,” Waterhouse elaborates.
“This raised the important question as to how a country such as PNG can develop a sense of its own national identity if no-one will publish its history.
“A second question was how Australians can be expected to engage practically with its nearest neighbour if they know so little of the historical relationship between the two countries.
“A primary objective, therefore, has been to provide Papua New Guineans with a fresh perspective on their own history and Australians with a better appreciation of our historical relationship at a time when political and economic relationships are becoming more complex.
“The book has been written for a general audience, although it breaks new ground in a number of areas and is multi-disciplinary in its approach.”
Waterhouse hopes his book will encourage academics in both countries to embark on further research into, and help develop a broader understanding of the history of the Australia-PNG relationship.
Waterhouse has recreated a period that has been largely obscured by time and the destruction of records during WW11.
In doing so, he has drawn on diverse and often unexpected source, with insights gained from studies in anthropology at and in economics and economic history at the .
His experience in senior positions with government (the Commonwealth Treasury) and in business (with Westpac and as a consultant) has also enabled him to explore the commercial, financial and government dimensions in depth.
Not A Poor Man’s Field is available through bookshops in and from the UPNG Bookshop in PNG.
In , the recommended retail price is $59.95.
You can also purchase copies through this website http://www.notapoormansfield.com/  for only $50 plus postage and handling.
Please note that the book is unlikely to be available until mid-August in and October in PNG.
One hundred copies of a Special Limited Edition of Not A Poor Man’s Field are also available for purchase.
Each copy contains four Bulolo stamps, showing a Junkers G31 flying over the goldfields flanked by a Spanish galleon and a white miner panning for gold, with a villager looking over his shoulder.
The stamps are mounted in a panel on the front of the book, which is bound in maroon reconstituted leather, with headbands and marker ribbon, decorated and lettered on the spine and decorated on the front, all in gilt.
These stamps were used by Bulolo Gold Dredging to post gold bars back to in the 1930s and early 1940s and are therefore genuine artefacts from the pre-war goldfields.
The Special Edition also includes a brief statement by the acting chief post master at Rabaul in 1935 on the cost of posting gold bars, together with a first-hand account by one of the pilots of the unusual way the gold was transported.
As the gold was carried in all sorts of conditions by plane from Bulolo to and then by ship to , some of the stamps have minor perforation damage or slight staining.
In selecting the stamps, preference has been given to those whose image is largely unobscured by the post office cancellation.
The cost of each Special Edition copy is $A300, including postage and handling within .
Posted by Malum Nalu at 8/15/2010 02:47:00 PM