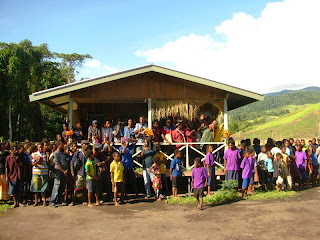 Throbbing kundu drums, tribal chants and a magical display of fine traditional regalia marked the opening of a new aid post, staff house and water supply projects for the people of Wonkins and Kapunung last Friday.

It was a proud occasion for the Babuaf communities from the Lower Watut Region in Morobe province as it also marked the construction and completion of 14 water supply projects for the other villages.

The projects were funded by MMJV and constructed by LDS with the villagers contributing sweat equity that saw the project through to completion.

The water supplies were constructed by LDS while the villagers build the aid post and the staff house.

Many were unable to stem the flow of tears, as the occasion marked the beginning of the end of many years of difficult traveling that had unfortunately claimed the lives of many villagers, including children, mothers and babies during child birth.

Namus, when addressing the people, stressed the need for government and communities to strengthen ties and work with development partners such as MMJV and non-government organisations such as LDS to help facilitate service delivery to the people.

Namus said it took more than 30 years for such services to come to the area.

“By building standards, the aid post may seem small; but by its very nature it is a significant development project for us as a people,” he said.

Dr Theo echoed Namus, saying there had not been any real service provided for the people of Lower Watut for many years.

“This is the result of working together!

“ Creating partnerships with organisations and in this case, partnership with MMJV and LDS where we are fortunate to receive the aid post and water supplies,” he said.

Again stressing the theme of partnerships,  Waki said through interaction with government, NGOs and most importantly with the support of people and their leaders, MMJV were able to implement the projects.

“The company will not take over the role of the government to deliver services but is committed to work together through partnerships that would enable delivery of vital services to the local people, bearing in mind it has to be tied into wards, LLG districts, provincial and national government plans and priorities.”

He  commended the people and encouraged them to take care of the infrastructure.