The second Ahi Festival will be held at the Sir Ignatius Kilage Stadium in Lae from December 13-16, 2012. 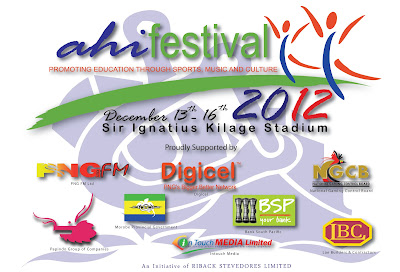 The inaugural Ahi Festival, a major cultural and sporting event involving the six Ahi villages in and around Lae, was held at the Sir Ignatius Kilage Stadium in Lae from Dec 12-17, 2010.

It is an initiative of Riback Stevedores Ltd, the major employer of Ahi men and women from the six Ahi villages of Wagang, Yanga, Butibam, Hengali, Kamkumung and Yalu and has their full support.
Sporting events included basketball, volleyball, netball, soccer, touch rugby and a number of other fun games for the kids.
The 2010 Ahi Festival – with the theme Promoting Education Through Sports & Culture - was aimed at raising funds for the establishment of an Ahi resource centre, an education facility which will have a library, computer laboratory and conference and workshop facilities.
“The Ahi Festival is an initiative of Riback Stevedores Ltd and has the full support of the Ahi community,” explained Riback general manager Peter Boyd in 2010.
“The company believes that the effects of the social problems facing the Ahi community can be wide-ranging in size anywhere from local effects on a family or a village to the Lae community and even the entire society.
“The company therefore wants to do its part in helping the Ahi community to help themselves to take a lead now in working towards addressing some of their social problems.
“We hope other members and stakeholders of the Lae community can also join in and help the people of Ahi in their endeavours to create an educated and orderly community that can co exist peacefully with others in the wider Lae community.”
Boyd said the social problems of the Ahi community could be addressed only if the community could unite and work together in search of solutions with the support of strategic partners.
“The Ahi Festival can be a powerful tool to unite the Ahi community,” he added.
“It can also create awareness of the social issues and promote a team approach with key stakeholders to address the socials problems with the view to minimise its crippling effects on the people of Ahi – the current generation and also the future generation.”
Some of the main objectives of the Ahi Festival included:
•           Promoting community unity;
•           Promoting and preserving Ahi culture;
•           Creating awareness on social Issues and assistance available; and
•           Showcase local talents in culture, sports, music and business.
The Ahi villages are all located within and around Lae – the industrial city of Papua New Guinea.
Along with the expansion and development of Lae, these traditional villages are also being forced to accept new changes and influences brought about by the changing socio-economic conditions.
The changing socioeconomic conditions have placed a high demand for land on the Ahi communities.
This has seen most of the traditional land being taken away.
Land was taken earlier by missionaries, then the colonial government and recently the state and industry.
The attractions of  urban life along with government’s and industry’s demand for labour has also attracted Papua New Guineans to migrate to Lae in search for work and better living conditions.
This unfortunately has created a need for more land.
Consequently, customary land which used to be hunting and gardening land has all been replaced with buildings, factories and urban settlements.
Without gardening or hunting land, most inhabitants of the Ahi community are now forced to adopt and embrace the cash economy.
“Education of the children of Ahi is therefore important,” Boyd said.
“Without land and other natural resources, the human resources must be trained and developed if the Ahi community is to survive and live in peaceful co-existence with every other Papua New Guinean and the wider Lae community.”
The economic changes around Lae also bring with them many tangible and intangible social problems which affect the Ahi communities.
Tangible social problems include unemployment; law and order issues; drug abuse; alcohol problems; and school drop-out rate is high.
Intangible social problems include breakdown in moral standards; lack of ethics in community leadership – a recipe for corruption which affects the management of church groups, clans and businesses owned by the people; community disharmony; and breakdown in the family unit
Posted by Malum Nalu at 12/10/2012 11:17:00 AM