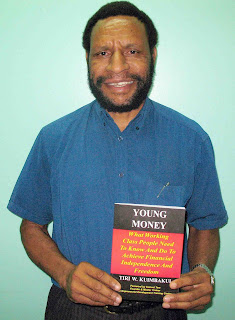 Tiri Kuimbakul with one of his his latest books 'Young Money'.
by TIRI KUIMBAKUL

One of the recent topics on my weekly "Young Money" radio program was on the subject of inflation in PNG. I divided my talk into five parts, based on the Bank of PNG's recent Monetary Policy Statement. The five parts of the talk were:

1. What is inflation?
2. Why has inflation risen?
3. What combative measures are being taken by the Central Bank and the government?
4. What are some of the likely repercussions on the economy and families?
5. What should people do?

I would like to summarise the main points of the talk for the benefit of my readers.

Inflation is a word used to describe increases in the price of goods and services. It is usually driven by the market force of demand outstripping supply. Another expression economists usually use is that inflation is a situation of "too much money chasing too few goods", or excess demand and limited supply.

2. Why has inflation risen?

There are several reasons for prices rising.

The first is the substantial increase in the world price for crude oil. Oil prices increased to US$140 per barrel in June 2008 (the highest on record) due mainly to increased demand from China and India as well as members of the Organisation for Petroleum Exporting Countries (OPEC) refusing to raise production.

Oil is what keeps the world economy rolling. It literally lubricates the economy. When it dries up, the economy finds it difficult operating.

The second is the rise in world food prices. Weather problems related to "global warming" characterised by long periods of drought or devastating rain and flooding are responsible for substantial reduction in food production. Food supply has fallen drastically but demand has remained and even risen.

Thirdly, PNG being an open and import-dependent economy has meant that inflation in countries which are our trading partners was "imported" into the local economy. This occurred because the local currency now fluctuates freely against other major currencies, particularly the American dollar, the Aussie dollar, the Euro and the Japanese yen. This compares with the period prior to 1994 when the country pursued a "hard kina" policy, under which the Central Bank maintained the value of the kina at a certain level against the major currencies. So part of the reason for inflation is attributed to the depreciation of the Kina against the Australian dollar (the Kina was weaker against the dollar, so importers in PNG needed more of the local currency to import goods from Australia).

The fourth factor at the back of rising prices was excess demand for goods and services generated by the high prices of our export commodities like gold, copper, coffee, timber, etc. The prices for such commodities saw significant increases, again on account of increasing demand from China and India. High prices for exports have translated into increase in money supply or excess liquidity in the banking system. This has in turn led to banks reducing interest rates on loans, which has triggered an increase in lending to individuals and the private sector. Basically what this has meant is that more money has been floating in the economy. More money available to the government, businesses and individuals, has led to more spending, meaning an increase in demand which has not been matched by supply both of imported and locally-produced goods.

A final reason for inflation which the Bank of PNG does not mention but which we know has become "systemic and systematic" as former Prime Minister Sir. Mekere Morauta has described it, is corruption and bribery. This disease has become so prevalent that the cost of bribery is now factored into the pricing of most of the goods and services in the country.

So, if you did not know what has caused prices to rise, there you have it.

3. What measures have been / can be taken to combat inflation?

There are usually two policy instruments available to the Central Bank and the government to reign in inflation or at least minimise its impact on the country. These are monetary policy and fiscal policy.

The Central Bank's main monetary policy instrument is the interest rate. In July the Bank announced that its interest rate for the Kina Facility Rate (KFR) would rise by 25 basis points to 6.25% for the first time since September 2005. The KFR is the rate at which the Central Bank lends to commercial banks.

The Bank also issues Central Bank Bills (CBBs) and Treasury Bills on behalf of the government through which it seeks to reduce the amount of cash floating in the system. These bills are debt instruments offered to banks and the general public at attractive interest rates. In that way some of the cash which would otherwise be floating in the economy is quarantined or kept out. As at 25th July 2008, the Central Bank has issued CBBs worth K4.0 billion.

In addition to the above, the Central Bank gets involved in the foreign exchange market. It buys or sells foreign currency (esp. the US dollar) depending on which way it desires the exchange rate to move. For instance, if the Bank wants to keep the Kina from falling or depreciating against the US dollar, it sells US dollars to banks.

These are instruments the Bank will use in an effort to contain inflation.

The government will need to control expenditure in order to keep prices down. This requires a lot of discipline and control, because there is pressure on the government to spend on projects that were promised during the 2007 General Elections.

I can foresee hidden battles being fought between politicians and bureaucrats, with politicians wanting to spend money to satisfy their voters and the bureaucrats doing as much as they can to keep a tight control on expenditure because they want to manage the economy and contain prices.

The government has millions in trust accounts already, and now it is talking of another supplementary budget because income has exceeded expectations! It will take a lot of guts and political will to control expenditure, otherwise huge spending will inject more cash into the economy and inflation will rise beyond the Central Bank's projects. The implications are dire should that happen.

4. What are some of the likely repercussions?

Inflation will reduce the "purchasing power" of our income. Whereas we could buy so many things with a certain amount of money, now we will buy only a little. We may seem to have a lot of money but what that money can buy will be much less. I know people can identify with this already. Just yesterday my wife complained spending K50 for so little. Such complaining will become the order of the day as we go into the rest of the year and the next couple of years.

Most people will find it very hard maintaining their living standards, and those living in poverty will be driven even further. This can lead to an increase in social and law and order problems as people strive to make ends meet. Problems such as prostitution are most likely to increase. And as people buy cheaper and low quality food, their health will suffer.

I can foresee employers and employees fighting it out, with the former demanding pay rises and the latter refusing. Our MPs, who are already well-paid, have been calling for pay rises because they reckon they cannot meet the expenses related to their "high" lifestyles. If they are feeling the pinch and are complaining, wait until the workers rise up!

Development will be stalled as the government comes under pressure to control spending. Many projects will be delayed or postponed, some indefinitely. A lot of frustration will ensue, with MPs being branded liars.

I also see corruption increasing as people steal from the public purse or asking for bribes in order to maintain their "artificial" lifestyles.

I do not want to be a "prophet of doom", but the above are some of the repercussions of high prices in the country I can foresee.

5. What can families and individuals do?

My encouragement to our people is that we all need to control expenses and live "below" our means. This may be a hard thing for people to do, but there is no other way to survive in a high-price situation.

People need to distinguish between "needs" and "wants", for instance, and stick to the "needs". They also need to know the difference between "assets" and "liabilities" and avoid buying "liabilities".

Papua New Guineans need to stop drinking alcohol, smoking, chewing betel nuts and gambling. People don't realise that they spend hundreds per year on these items and activities which neither add to their health nor their wealth. In my seminars I refer to spendings on these items as "money down the drain". Parents (and especially fathers) cannot afford to drink or gamble these days.

For people who have cars, it is probably time to walk more than driving. It’s cheaper and healthier to walk to town or to work than to drive wherever this is appropriate. Some people might find it inappropriate walking but others may find it to their advantage to walk.

I would also encourage people to make better use of their free time to earn extra money to supplement their incomes and maintain their living standards. People in town must use their backyards to grow some food. I know a lot of people do this, and I encourage them to continue doing so. Many mothers sell ice blocks, peanuts, ice cream etc while the fathers go to work. They need to do this even more, but at the same time control their spending.

For people in rural areas, this is an opportune time to produce more local food stuff. As store goods rise in prices, people in towns will turn more to locally-grown food. People who have land and are willing to work can cash-in on this opportunity.

People in rural areas need to stop bothering their wantoks in towns with constant demands for financial support. Town people are feeling the full impact of inflation, with prices in both stores and markets going up. What they do not need now is more pressure from relatives.

About the author: Kuimbakul, 42, is from Mount Hagen in the Western Highlands and graduated with an honours degree in economics from University of Papua New Guinea in 1988.Kuimbakul has worked as an economist with the Department of Agriculture & Livestock (1989-1990); assistant Export Manager with Coffee International Limited (1991-1992); economist and general manager of Industry Affairs Division, Coffee Industry Corporation (1993-1999); export Manager with Kongo Coffee Limited (2000); and freelance consultant (2001-2008)He currently manages coffee marketing projects, advises community development associations, does church work, writes and publishes books, conducts seminars, and speaks to students and young people when he gets the opportunity. He blogs on http://tirikuimbakul.blogspot.com/
Posted by Malum Nalu at 8/21/2008 11:01:00 AM