The search for Amelia Earhart continues 71 years on 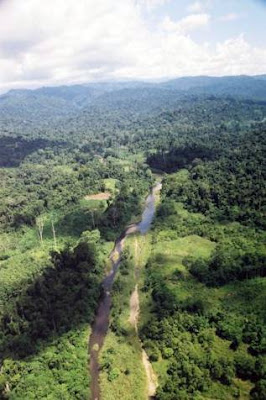 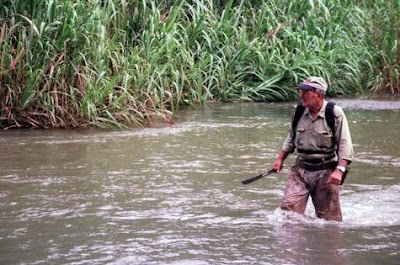 David Billings crossing a river in East New Britain in his undaunted search for the plane.Picture by www.electranewbritain.com.


Four hundred miles northeast of Port Moresby, in the wilds of East New Britain island, is an American aircraft.

It lies on the jungle floor covered with overgrowth and it fell here many decades ago.

Discovered during WWII by an Australian Army patrol, the plane is well hidden from the air and may be near-impossible to see from the ground.

It is an enigma — and reportedly the plane of Amelia Earhart.

Earhart and her navigator Fred Noonan, disappeared over the central Pacific on July 2, 1937, flying east along the Huon Gulf coast on their way to Howland Island, 4600 kilometres (2858 miles) to the north.

This year marked the 71st anniversary of one of the greatest unsolved aviation mysteries of all time.

It intimately involves Papua New Guinea as Lae was her last port of call before she disappeared somewhere over the vast Pacific for the longest stretch of her around-the-world flight.

The mystery and a long fruitless search -costing many millions of US dollars - had begun.

Yet that area on Howland Island is well over 2,000 miles from here.

So how could this plane on East New Britain be Earhart’s?

Australian David Billings, an aircraft engineer employed by Air Niugini, may have the answer, however, he refused to comment when contacted by me yesterday (Tuesday, August 19, 2008), except to say, “Malum,your ‘good sources’ are actually ‘bad sources’.

After a dozen trips to the jungles of East New Britain over several years since 1994, it appears he has yet to locate what he believes to be Amelia Earhart's downed Lockheed Electra L-10 aircraft.

Billings has been dedicated in his resolve to locate the missing plane.

An American source, however, rebutted Billings: “Malum, that’s a lot of bull.

“What I hear is he (Billings) doesn’t want the news out that he couldn't find it - 12th time - and is afraid someone else will go find it.”

In April 1945, the 20-member patrol of the 11th Australian Infantry Battalion ‘D-Company’ is evading the Japanese while in the dense jungles of East New Britain.

Suddenly they come upon a wrecked aircraft — a two engine, twin tailed plane much like Earhart’s.

An old repair tag is pulled off one of the engines and the men moved on — fearful of falling into the hands of the Japanese.

The information on the tag is scribbled down on the edge of their map and then forgotten.

Forty-five years later at a veterans reunion, Don Angwin of that same Australian Patrol, talks about the aircraft that he and his patrol members found in the jungle.

He starts a search for the plane in 1993, and is joined the following year by David Billings of Air Nugini in Port Moresby.

Angwin died in 2001 but Billings continues the search, now living in Queensland, Australia.

The Marvello River Valley is steep and travelling is difficult — and only possible by foot.

Billings, now 68, has been to that valley nearly a dozen times.

Now he and the other members of the search team again had planned to be there this past July.

Yet, delays came and they didn’t get a helicopter as they had hoped.

Not willing to give up, Billing’s search team rescheduled for August.

Camping out in the jungle cannot be considered ‘fun’ as the myriads of snakes, volume of insects, and variety of animal life would fill a book on zoology.

With perhaps a few hundred metres of their starting point, Billing’s intrepid team began their assault.

There’s no Japanese military chasing them as there was for the patrol 60 plus years ago, yet the uphill trek does take its toll.

The Army patrol only found the aircraft because they were so far off-trail, trying to avoid capture or confrontation.

Up into the valley the search team climbs, but not without the resistance of the jungle growth.

Much of the scenery may have changed during the last half-century.

Several days in, means several out.

Even if located, the plane cannot easily be removed — if at all.

Few people — if any — have gone so far into this jungle, and for a week there’s been no sign, no call, and no message from Billing’s team.

It is as if the jungle has swallowed them up.

Then the lead member on the trek breaks through the foliage — Billings has returned.

The ride to Port Moresby from East New Britain must have been despairingly slow, but there is no report to the news media, and Billings has left Papua New Guinea for home in Australia.

It seems that twelve times in that jungle is not enough — there is no report of the plane.

Email ThisBlogThis!Share to TwitterShare to FacebookShare to Pinterest
Labels: The search for Amelia Earhart continues 71 years on