Office of the Prime Minister


The National Government has received the “Report on the Commission of Inquiry into Processes and Procedures used to Brief Out Matters to Law Firms, and Processes and Procedures for Paying Public Monies to Law Firms” from Judge Warwick Andrew.
In receiving the document today, Prime Minister Peter O’Neill,  said the completion of the report by Judge Andrews and his team would provide clear direction for the Government officials in ensuring transparency and proper process, and save millions of Kina in legal bills. 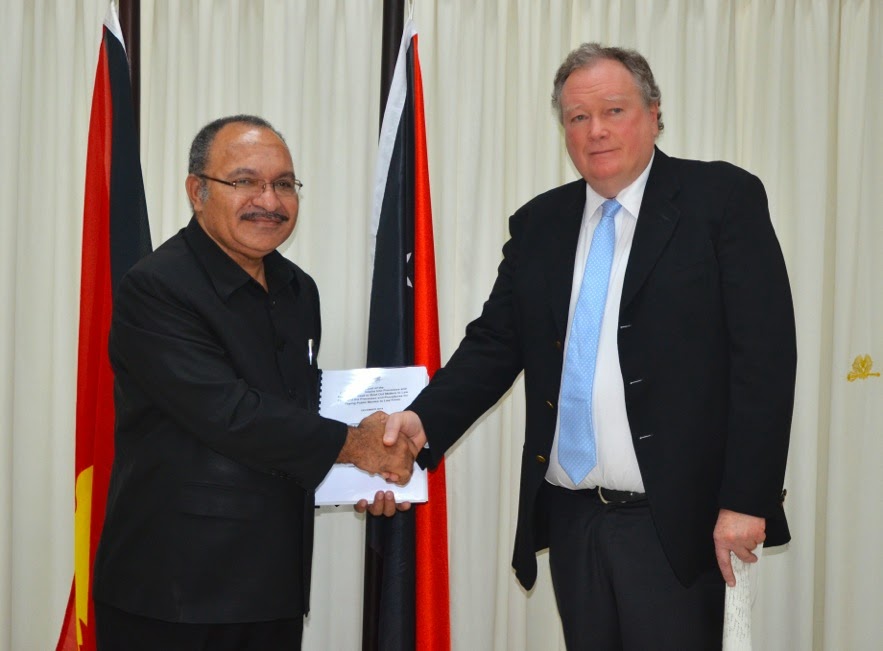 “This area of brief outs has been the subject of abuse for many years, well before this government came into office,” O’Neill said in receiving the report.
“As a government we have been receiving the raw end of this discussion, mainly because we’re trying to clean up the mess that has been there for a while.
“There are some issues that are still out there for public debate and of course some issues are before the courts.
“But we will present this in the coming session of the Parliament so that we can make sure that we tighten up the procedures in which the brief outs are being made in the future to many law firms that have been acting about half of the state for many years.
“I know that these recommendations will save the state lot of funds and excessive abuse that is being happening for quite some time, and as result of this inquiry we are going to ensure that there are strict guidelines that are going to be established from here onwards.”
Judge Andrews made the following statement before presenting the report to the Government:“The report was the initiative of the Prime Minister.
“Despite previous investigations having been made into the processes and procedures for clients and brief out of legal matters to law firms, and despite several recommendations having been made, the area remains the subject of abuse.
“The focus of this inquiry, under the terms of reference, has been to the reform of the system by way of instituting proper control mechanisms.
“As is well known, the state has made vastly excessive amounts of legal work carried out by private law firms from the past.
“The commission believes and hopes that if its recommendations are implemented there will be appropriate systems in place which will prevent such abuse.
“The commission has been completely independent, there has been no interference with the commission in any way, either political otherwise, by anyone at all.
“Having said that I would now like to present the report to the Prime Minister.”