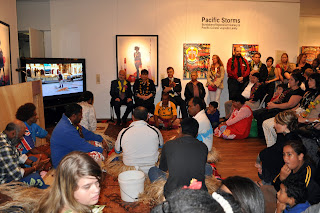 Pacific Storms, a contemporary art exhibition of significant Pacific island issues curated by Papua New Guinea woman Joycelin Leahy, opened to a record crowd of 425 people at Bundaberg Regional Art Gallery last Wednesday night.
It was opened by the Australian Parliamentary Secretary for Pacific Affairs, Duncan Kerr.
The turn out included audiences from around Australia, Pacific islanders, residents of Bundaberg Region and 27 of 33 artists – Papua New Guineans included - who exhibited in the show.
In his speech, Mr Kerr said the artworks challenged the traditional perceptions of Pacific cultures and their arts.
He called Pacific Storms a “superb example of contemporary Pacific Island culture”.
“I am sure that those who visit the exhibition will be surprised and perhaps startled by what they see,” Mr Kerr said.
“The works on display present a contemporary perspective of Pacific societies and cultures.
“It is a perspective that many Australians, including those in the art world, may not be prepared for.”
He said the exhibition brought an important understanding of Australia to its closest neighbors and the fact that Pacific islands’ concerns and their worlds were not so different to Australia’s.
Australia has committed $150 Million over three years under the Climate Change Adaptation Initiative to help meet high priority adaptation needs of vulnerable countries in the region, which focuses on Pacific Islands and East Timor.
Responding to other major social issues highlighted in Pacific Storms, Mr Kerr said development assistance alone could not improve long-term economic outlook or Pacific Islands, therefore, Australia had placed a greater priority on trade and economic cooperation with its Pacific partners.
“Since its opening, there have been a number of public programmes organised by curating partner, Bundaberg Regional Art Gallery,” Ms Leahy told The National.
“These included leis making and weaving which drew another crowd of 378 people last Saturday at the gallery.
“During the week, PNG artists, Daniel Waswas and Peter Leo Ella engaged with Bundaberg School children to discuss their style of artwork and talk about Pacific people and the culture.”
Pacific Storms will remain on show at Bundaberg Regional Art Gallery until July 12.