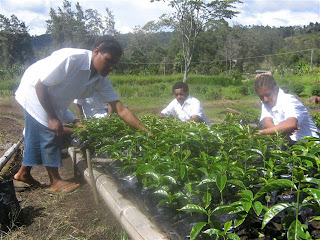 The School Nursery Programme, a component of the much-marveled Coffee Curriculum, provides a ‘field laboratory’ for students to learn the important and initial stages of coffee production.

The School Nursery Programme, which was launched last week, is an add-on to the Coffee Curriculum so that it is not merely taught in the classroom but practically applied, hence, coffee planted in the field and not on classroom chalkboards.

The Coffee Curriculum is a joint development of the Coffee Industry Corporation (CIC) and the National Department of Education (NDoE) and was officially launched in 2008.

Its purpose is to educate and train students with the appropriate coffee knowledge and skills to be productive and purposeful citizens in the community when they leave school.

In 2009, the first in-service was held to empower teachers and discuss the implementation of this innovation.

CIC industry operations manager Ellison Pidik pointed out during the launching that the benefits of the innovation were shared equally between partners - CIC and the government through the NDoE.

“The hands-on knowledge that will be imparted to the many children is a lifetime experience and this kind of partnership would establish a socio-culture for our young future generation,” he said.

Under the District by District Village Coffee Rehabilitation Programme funded by the National Agriculture Development Plan (NADP), the CIC budgeted K300, 000 for the School Nursery Programme.

Each of the pilot schools in the Eastern and , Simbu, Morobe and provinces will establish a nursery.

Nursery materials will be supplied to all the schools.

These seedlings, when planted in an area of four hectares, can produce parchment valued at K30, 000 to K35, 000 at current prices.

In line with the industry goals of increased production of high quality coffee, the Coffee Curriculum and the Nursery Programme fits CIC’s vision for “prosperous farming communities” and a “vibrant competitive and sustainable coffee industry”.

Mr Pidik said CIC was utilising schools as vehicles for extension of coffee knowledge and teachers as the change or extension agent.

“CIC does not have resources to put enough extension officers in all districts, thus, utilising the education system, we can realise our corporate visions and mission,”he said.

The second launching of the School Coffee Nursery Programme will be at the end of February in province, a significant Robusta coffee-growing area.