Sweet and proudly made in Bulolo 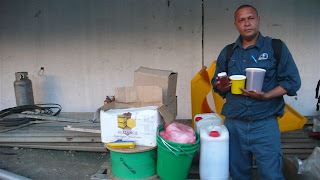 This is Bulolo’s second harvest in two years after the visionary politician brought down established honey trainers from Goroka, province, to teach his people about beekeeping and honey production.

The first harvest after four months last year was less than 200kg while this second harvest is more than 300kg.

The 20-litre containers in the picture are packed with sweet Bulolo honey and the cardboard boxes as well.

Mr Basil also designed a logo for the jars.

In the middle is a picture of a honey bee, the PNG Made logo and Bulolo district logo.

At the bottom, it reads: “Pure honey from natural flowers on the gold land.No additional additives.”

Last Thursday, The National reported that provincial beekeeping coordinator Tella Loie was in Bulolo to assist honey farmers with their harvest.

The hives matured for harvest in just four months from being established which has excited Mr Loie and his team.

“The results were very exciting, unexpected and greatly impressive,” he said.

Mr Basil is preparing to present each jar of 250g, 500g and a 2kg in the coming March session of Parliament.

Mr Basil has urged his colleague MPs to invest into honey production because the country had wasted its flora and fauna which could be useful for the honey industry.

Apart from that, it could also have some indirect benefits such as employment opportunities, food security, education and income generation.

It has been estimated that PNG produces 40 tonnes of honey valued at K400, 000 that is consumed annually.

PNG consumption, however, is estimated at 200 tonnes and valued at K2 million annually, which is heavily subsidised by imports mainly from .

Mr Basil said if only the agriculture department were in union with the political will of MPs, the bee market would be captured by promoting locally-produced honey in the rural areas or districts in the country.