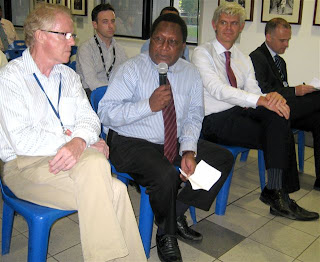 THE finalisation of financing arrangements with lenders towards the PNG liquefied natural gas (LNG) project is spreading some cloud over how the interest rates are going to perform in the coming years, The National reports.

This is because the final agreement will determine how much of the money lent would be retained in the local economy and how much would go back overseas.

If more dollars f the borrowings are retained in the local banking system, the play of the existing rate would be affected.

Generally, however, when the project gets underway, the rates will increase, according to Paul Crimmins, the head of Westpac’s relationship banking.

He said until financial close happens, it was yet to know what would be the internal contracts awarded to domestic and foreign companies on the US$15 billion (K40 billion) LNG project which was a US dollar denominated project.

These was part of the discussions during yesterday’s economic outlook seminar, part of a series of events marking Australian week cerebrations held at the Australian High Commission in Port Moresby.

Bank of PNG Governor Loi Bakani said: “Basically it comes down to the flows in and out of the country.

“At this stage, the financial close coming up … we are not yet able to get a clear indication of what contracts will be done locally and those in US dollars done overseas.”

He also said there were exemptions given to companies under the project.

“That is, where most of the transaction is going to take place,” he said.

ANZ’s Jim Yap said it all depended on the currencies’ strengths, when at the moment, the Australian dollar was floating on a high rate.

“Taking that into account, whilst the kina may have the ability to appreciate because the demand of the currency gets higher in view of the PNG LNG project … so there is an underlying demand, but in terms of cross currency exchange rate, it may be a bit of a challenge.”

Mr Bakani also said there was a working group putting together a submission for the proposed offshore sovereign wealth fund.

The submission is expected to be presented to the National Executive Council (NEC) in June.

“Once that is in place, that will take care of Government inflows,” he said, adding the inflows will be such that not everything will come into the country all at once.