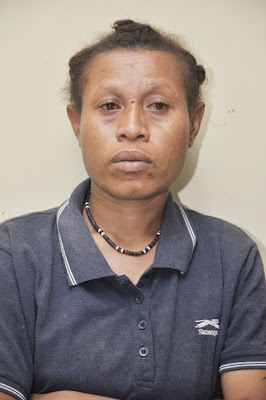 POLICE in the National Capital District are investigating the alleged rape of Helen Mark Kuipa (pictured), the mystery woman “lawyer” who was caught on Saturday evening, The National reports.

National Capital District Metropolitan Commander Chief Superintendent Fred Yakasa confirmed yesterday that Helen has laid a complaint for rape, and this was being investigated.

The complaint for rape was registered at Boroko Sexual offences Unit.

Helen, who had been on the run and hiding in the city since the Jan 12 escape, was caught on Saturday evening at the Talai Settlement.

Police say her involvement in the escape of the 12 prisoners, including the notorious William Kapris, was central to its success. She was described as a key player in the whole operation.

She was cooperating well with police interrogations, and Yakasa had described her testimony as fitting the pieces to a jigsaw puzzle. But he was visibly angry when news emerged that the woman was raped by a policeman.

He said it was the work of one or two ‘rotten’ officers that give a bad name to Police and the force has no place for such officers.

“This cannot be tolerated. No prisoner or suspect should be attacked in this manner. This is the last thing you expect from a law enforcement officer. If the allegations are confirmed, the officer or officers will be hauled up to face the law,” Mr Yakasa said.

Helen Mark Kuipa, 26, of Kupalis village in Wabag, Enga province has been charged with one count of aiding the escape of a prisoner, breaching section 138(a) of the Criminal Code (chapter 262). She faces 14 other charges. She is expected to appear in court today.

The police Major Organised Crime Investigating –MOCIT Team is expected to continue their interrogation of Helen after that.