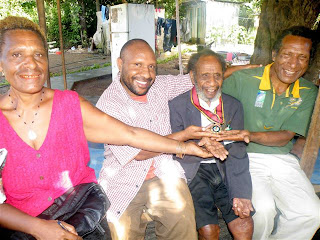 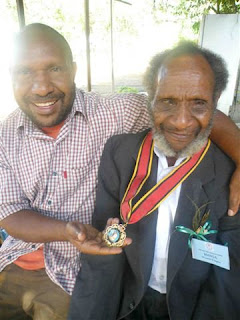 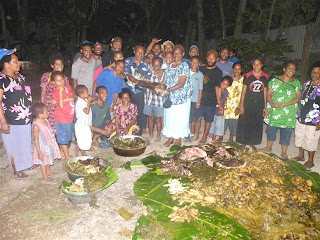 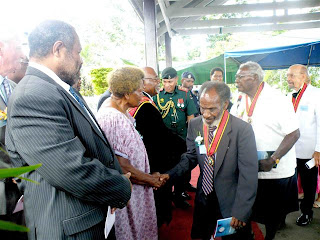 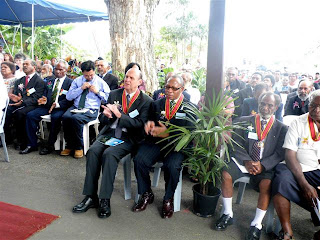 Wunmba Wengui Mangi (second from right) at Government House at April 23
Among the many people gathered at Government House in Port Moresby on Thursday April 23, 2009, for the New Year’s honours list for investiture was one sprightly old man from Dei Council in the Western Highland province.
As his name was called, Wunmba Wengdui Manga gingerly trod his way through the long line of people to be invested with the Insignia of an Officer of the Order of Logohu (OL), by Governor-General Sir Paulias Matane.
Mr Manga, though wizened by age, was bestowed the Logohu “for services to the community through contributions as a well-respected traditional leader and councilor among his Dei Council community and the Western Highlands province”.
The National featured him in the Weekender last year, in which the story was told of how the Minimbis and Kombigas of the Dei Council area have become a more-disciplined group of people, largely because of his stewardship.
The Minimbe Mimke Napakes, Papekes, Nambka Uimbosong and Kombiga Mandong people have benefited greatly from his guidance.
Mr Manga is said to have been born in the early 1920s, hence, would have been around at the time of first contact by the Leahy brothers and Jim Taylor in the 1930s.
He was baptised into the Lutheran Church, together with his wife, on June 6, 1949, given a new name, “Wengdui”, and was appointed a church leader.
In 1963, with the establishment of local government councils, Mr Manga was elected as a councilor and remained so until his retirement in 1987.
Because of his Christian upbringing, Mr Managa discouraged retaliation and revenge during his time in office, but at the same time was a feared man whom nobody dared to disobey.
In recognition of his effort and contributions to the development of Western Highlands and Papua New Guinea, in 1997, then Governor, late Robert Lak, presented him a Silver Jubilee medal.
Dei MP Puri Ruing also presented Mr Manga other medals.
Although in his twilight years, he remains a source of wisdom and inspiration, after many years of being such a powerful and authoritative leader in the Dei Council area.
Mr Manga’s nephew, David Karl, said there were many other outstanding leaders like him throughout the country who had died with being given any form of recognition.
Mr Karl said he and other members of Mr Manga’s family had nominated him for a Logohu award towards the end of last year.
“Otherwise, the old man would have died without any recognition,” he said.
“There are many people like him all over the country who are not recognised.
“We nominated him for a Logohu wards towards the end of last year, and surprisingly fast, his nomination was accepted.
“He had tears of joy when he was awarded the medal by Governor-General Sir Paulias Matane.
“He said he would die a very happy man.”
Another family member, Clara Kopil, said it was very emotional for them to see Mr Manga receive him medal at Government House.
“We dressed him and took him to Government House,” she recalled.
“It was the first time for him to be all dressed up like that.
“He insisted that he wear shorts, just like he did in the colonial days.
“It was so emotional for us to see him in shorts and he really stood out among the crowd.
“After he received the medal, he received a glass of champagne, and like everyone else, raised a toast and drank.”
Last Saturday the Western Highlands community at Erima in Port Moresby, in a feast befitting royalty, gathered en masse to celebrate Mr Manga’s medal.
Bigger things are planned for when he returns home, as the Dei Council community will celebrate Mr Manga’s contribution towards building of a new Lutheran church building, as well as his medal.
How many more Mr Manga’s are there out in the country?
Posted by Malum Nalu at 5/15/2009 10:30:00 AM