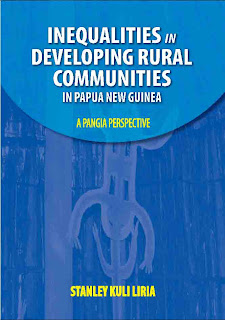 Young people including school children in Ialibu-Pangia, , have been urged to set goals and commit time to achieve them.

These were the words from lawyer and author Stanley Liria (pictured) during the occasion of launch of his second book titled Inequalities in Developing Rural Communities in Papua New Guinea: A Pangia Perspective (pictured).

“Goals cannot be achieved if we do not pursue them with some personal sacrifice,” he said.

“Without commitment and personal sacrifice, we cannot achieve our goals.”

More than 3, 000 people, who were very pleased to meet Sir Paulias, gathered for the launch and performed their unique Wiru culture.

Mr Liria’s book is about issues of rural development.

Through his three-year research on Pangia, he has probed on the first contact, early settlement of  clans and tribes, cultures and traditions and their conflict with modern laws and norms, impact of national and local-level government elections on society, development status, law and order and gender relations.

These subjects are discussed generally but applied with regard to the situation in Pangia.

Mr Liria says that he is very relieved that after three years, he has finally published his work.

He says that apart from his small legal practice in , he is passionate about writing and wishes to write on matters that will have influence on many people in society.

Inequalities in Developing Rural Communities in Papua New Guinea: A Pangia Perspective is his second book.

His first book was published in 2004 titled, A Law Awareness for Papua New Guinea – Our Guide to the Rule of Law, which has been well received by many school children in .

The author says his second book is suitable for our school children in the area of social science, personal development and legal studies.

He says it covers societies and their cultures and traditions, and their social relations.

“Therefore, it is a good book for social science students,” Mr Liria said.

“In the area of personal development and legal studies, it covers subject matters like national and local-level government elections, equality and freedom, gender inequality, role of police, courts and councillors, social and legal issues on marriage, land ownership and land dispute resolution.”

He acknowledged the support of Southern Highlands Governor Anderson Agiru and his provincial government, provincial administrator William Powi and his staff, and Ialibu/Pangia MP and Public Service Minister Peter O’Neill for ensuring the visit of Sir Paulias and the book launching.