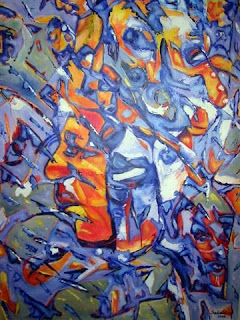 Artwork by Laban Sakale
Artwork by Mairi Feeger featuring various social ills such as sorcery, violence and alcohol. It will go on show in Bundaberg 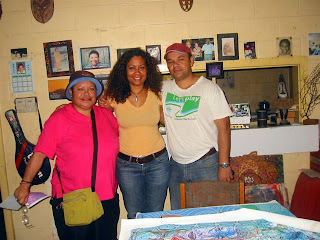 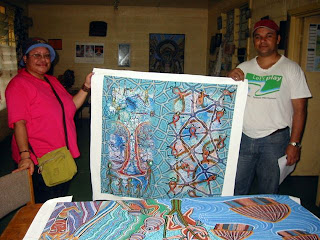 Pacific Storms explores the spirit, life, and challenges of the contemporary Pacific peoples. Pacific Islanders are proud of their resources, ocean, land, environment, culture, arts, languages and their traditional knowledge.
The Pacific remains one of the few regions in the world where you can find many hundreds of languages spoken, diverse cultures and some of the most vulnerable communities on the globe.
Being rich in both tangible and intangible heritage provides Pacific people with an endless source for artistic expression.
The unique art forms are evidenced in museum and gallery collections all over the world, collected over centuries.
It is from this valuable artistic source that a selection of well-known and emerging artists across nine countries was challenged to use their heritage to create a contemporary Pacific expression.
In their interpretation of who they are and how they feel about their societies, these new works were developed. In Pacific Storms, the challenge was to draw away from mainstream society’s categories and stereotypes of what is Pacific art and who Pacific people are, to explore new aesthetics.
Pacific Storms is also a platform of contemporary creativity which integrates and addresses the real issues of the modern Pacific society.
The Pacific region is marked by exceptional cultural and biological diversity within spectacular physical landscapes; thus each has their own unique way of building resilience to climate change, globalisation, security and civil unrest, HIV-AIDS and many other social issues.
These expressions are exhibited in hope that wider audiences understand the complex issues through the diversity of art across the Pacific.
In addition, staging Pacific Storms in the Bundaberg Regional Art Gallery links contemporary Pacific expression to the region’s significant history through the Australian sugar industry.
Australia’s sugar industry was founded on the sweat of men and women, some kidnapped and all enticed from more than eighty Melanesian islands including the Solomon Islands, Vanuatu, the Loyalty Islands of New Caledonia, and to a lesser extent, the eastern archipelagoes of Papua New Guinea, and Tuvalu and Kiritabati.
Today’s Australian South Sea Islanders are descended from indentured labourers in the nineteenth century.
In the nineteenth century this form of human trafficking was historically known as ‘Blackbirding’ and the individuals were called ‘Kanakas’.
There were about 50,000 Islanders and 62,000 indenture contracts.
Under the White Australian Policy, between 1901 and 1908 Australia ended this migration and deported most of those remaining.
Some were exempted from repatriation, and along with a number of others who escaped deportation, about 2,000 remained in Australia to form the basis of what is today Australia’s largest non-indigenous black ethnic group.
The question of how many Islanders were illegally recruited and how many chose to come remains controversial.
Bundaberg is a major centre for Australian South Sea Islanders.
Pacific Storms re-unites these communities with their ‘wantoks’ (relatives and friends) through a collaborative community engagement at the Bundaberg Regional Art Gallery.
Posted by Malum Nalu at 5/16/2009 11:30:00 AM