New antivenom will save lives in Papua New Guinea 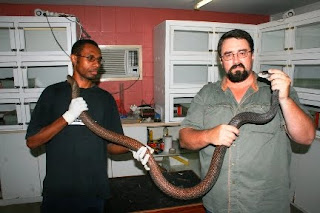 For the past several years, a small group of Papua New Guinean researchers, led by an Australian scientist, working inside a modest unassuming brick building in a quiet corner of the University of PNG's Taurama Medical School have helped develop a new treatment for one of PNG's most-neglected public health problems.

This week their work has emerged into the international spotlight following publication in a prestigious medical journal of the first results in the testing of a new Papuan taipan snake antivenom which is hoped will save hundreds of lives every year.

Papua New Guinea has some of the highest snakebite rates anywhere in the world, and in some parts of Central Province, the mortality rate is several times higher than malaria, TB and pneumonia death rates, largely because a lack of interest in the problem has made access to safe, effective treatments scarce, and unaffordable.

The high cost of imported Australian antivenoms has made it increasingly difficult for the PNG Government to meet the demand, and has contributed to a black market in these products which often sees them stolen from hospitals and sold illegally for up to US$3,200.

Results of the WHO-recommended preclinical assessment tests of the new antivenom have been published this month in the open access journal, PLoS Neglected Tropical Diseases (www.plosntds.org).

They show that the new antivenom, manufactured by the University of Costa Rica's Instituto Clodomiro Picado, effectively neutralises the lethal effects of taipan venom in laboratory tests, and is suitable for human trials.

The project was initiated by AVRU and Nossal Institute for Global Health snakebite researcher, David Williams who has studied snakebite in PNG for a decade, and long championed the goal of empowering PNG to produce its own antivenoms.

"Snakebite is a curable illness that only continues to kill and maim people around the world because it fails to return profits to drug companies" Mr Williams said.

"Access to safe, affordable medicines is a basic human right, and our focus is to give that right back to the victims of snakebite in PNG".

In Port Moresby, personnel from AVRU and the University of PNG collaborate to jointly run the research Serpentarium where Papuan taipans are kept to produce the venom used to make the new antivenom.

UPNG Researcher, Owen Paiva, who manages the Serpentarium with reptile keeper Jasper Gabugabu, said "plans are already being discussed to begin the next phase of the local capacity building which will see training of more PNG scientists in antivenom production, and the development of facilities to enable antivenom to be produced locally."

Financing this work is an urgent priority.

The project has received good support from the Office of Higher Education, Mr Paiva said, but in order to scale up to conduct human clinical trials, further fieldwork to collect more taipans for venom production, and laboratory experiments, dedicated funding needs to be obtained.

Australian Venom Research Unit Director, Dr Ken Winkel said "The partnership between the three Universities involved in the project is a landmark example of how international cooperation can help to solve the challenge of delivering, high quality, effective antivenoms to developing world nations".

Achieved with minimal specific research funding to date, the project is a blueprint for developing new antivenoms for other regions of the world with similar problems to PNG.

"AVRU and its partners in PNG and Costa Rica have shown that an affordable, potent antivenom to one of the world's most lethal snakes, the Papuan taipan can be produced for less than US$100 per dose by adopting a humanitarian approach to drug development" he said.

"In Africa and Asia effective doses of antivenom can cost many hundreds of dollars, and even then the quality of some products is quite poor, leading to a high risk of potentially dangerous side effects. Our approach to antivenom design may change that, and in this, PNG is one of the country's leading the way".

The concept of producing antivenoms to meet PNG's needs through an applied research institution based at the UPNG School of Medicine & Health Sciences follows closely the model used by the Instituto Clodomiro Picado in Costa Rica, which is itself, an autonomous research institute of the University of Costa Rica.

Its original role of meeting the antivenom needs of its own country have grown since it was founded; now placing it at the forefront of efforts to address snakebite problems in the developing world.

These are contributions which the World Health Organisation recognised this week, awarding the Instituto Clodomiro Picado the coveted "Dr Lee Jong-wook Memorial Prize for Public Health" at the 64th World Health Assembly in Geneva, Switzerland.

"We congratulate our Costa Rican colleagues for this important recognition of their work on behalf of not just their own people, but also snakebite victims in Africa, Asia and of course, here in Papua New Guinea" said Professor Teatulohi Matainaho, Dean of Research at UPNG.

"The recognition by WHO shows just how important and valuable to the health of nations, sustainable projects such as this can be", Professor Matainaho said.

David Williams agrees "PNG has the capacity to surmount the challenges of producing antivenom locally, and in addition to providing local scientists with valuable training and employment possibilities, this project will greatly improve the research capacity of the School of Medicine & Health Sciences, while at the same time meeting the need for affordable, sustainable supplies of an important essential medicine."

Dr Matainaho said "This research collaboration promotes UPNG's strategic research mission to develop and carry out research that has direct and practical applications to improving the health of our people, and also supports the greater vision of the Science and Technology Initiative of the PNG Office of Higher Education."

The research team are now working to raise the funding to commence human trials of the new taipan antivenom in Port Moresby later this year.

David Williams: 76719476 or by email: david.williams@unimelb.edu.au

Photographic images are available on request in 300 dpi JPG or TIF format: please email David Williams if these are required.