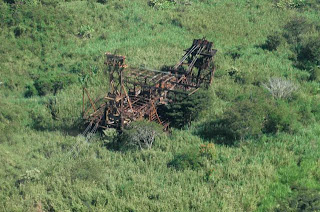 Caption: Aerial shot of a gold dredge in Bulolo. The rivers and creeks around Bulolo and Wau abound with alluvial gold. Picture by SIMON ANAKAPU of Morobe Mining Joint Ventures.

Bulolo MP Sam Basil aims to set up an alluvial miners’ association to cater for their needs as well as process their gold.

He said alluvial miners in his electorate were quietly sifting millions of kina worth of alluvial gold from rivers and creeks with no proper records being kept, as well as being cheated by unscrupulous buyers.

“I estimate that this industry contributes about K7 million per month to the economy of ,” he said.

“Eighty (80) % of this, I further estimate, is going out through dubious means.

“This alluvial gold goes out through logging and fishing boats, not through proper gold dealers.”

Mr Basil said he would push for government funding for a proper smeltering plant for alluvial miners in his electorate to process their gold.

“I’m going to put a plan together for the 2010 Public Investment Programme (PIP) to fund the smeltering plant, which will be owned by what will be known as the Wau-Bulolo Alluvial Miners’ Association,” he said.

“It will be driven by a private sector approach to curb undue influence.

“This goes with an export license of its own.

“By doing that, we reverse the current trend.

“It, of course, won’t take out the entire current illegal trend but it will help the government to have some data on this part of the economy of PNG.

“I will advertise for a partner to format a plan together for a smeltering plant to be situated in Bulolo or Mumeng station.

“With our export license, this is going to be a multi-million kina association.”