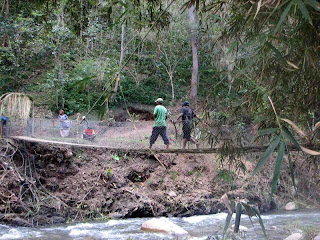 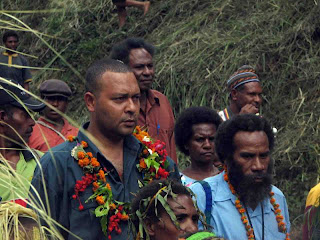 Villagers from remote Pararoa village in Upper Watut, Morobe province, now have a footbridge over the .

It was opened by Bulolo MP Sam Basil on Thursday last week (October 9).

The bridge was built with assistance from Mr Basil, PNG Forest Products in Bulolo and Hornibrooks.

He told the people that the footbridge was part of his vision to bring development to Local Level Government (LLG) level.

“We have many more footbridges to build,” Mr Basil said.

“Previous Bulolo MPs have delivered services only to district level, and not to the rural areas through LLGs.

“I will allocate resources to each LLG in the Bulolo electorate.”

He told the people that they would benefit from services such as an ambulance, a multi-purpose tractor as well as VSAT services to provide them with telephone and Internet services.

Upper Watut LLG president Waka Daimon said Mr Basil made a commitment to build the bridge before he went into Parliament.

“This MP has a heart for Bulolo electorate,” he said.

“The message I want to make clear to you people is not to ask him for free handouts.

“He is trying to bring development to the Buololo electorate.”

Bridge builder Atarus Lini Apo, who is a Boys Scout troupe leader in , built the bridge together with his scouts from the First Watut Scout Association under its obligation “to serve the community and take care of national resources”.

“This is under the skills training to build foot bridges,” he said.

“We pass our appreciation to provincial Boys Scouts commissioner Sailas Mapan for his support of the project.

“We plan to build several more foot bridges in the Upper Watut LLG.”