Bulolo Plans to Rise and Shine in Five Years 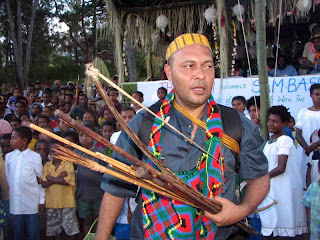 Caption: Bulolo MP Sam Basil in on October 9 to deliver an ambulance

It used to be a name heard in conjunction with gold. Since those early 1900’s the echo of names like Wau, Eddie’s Creek, Mumeng and Bulolo have subsided. Bulolo because of the PNG Forest Products Ltd managed to remain afloat. Garaina – in the Waria area – also came to the fore in 1970s and early 1980’s because of tea but has dwindled.

But that the drowsy, limp district is getting a new lease of life and wants to make its mark, and take its place with the great, resource-rich districts in .

There are two key reasons for Bulolo District’s stir from its slumber. The first is successful exploration for gold and copper that has placed names like and Wafi on the minerals map.

Harmony Gold has found the prospects in substantial enough to lead the formation of a Morobe Mining Joint Venture. Nothing unusual in that – except their mission statement – using their finds is to make Morobe a Mining Powerhouse in the nation again.

With extensive exploration work going on, this cannot be treated as an idle passing statement. Wafi is on track and Triple Plate is exploring – with former PNG Mining Director Tony Williams at the helm and so are other exploration companies.

Mining tends to create townships in no man’s land settings. But not with the other reason, embodied in the nearly six foot frame of Bulolo MP Sam Basil. Businessmen with his own security and fisheries firm, political advisor, self-taught engineer with a love of telecommunications and internet e-mail communications, and a natural knack for getting things done – those all hint at this vibrant leader from Buang Local Level Government.

His mind is focused and fixed: Basil wants an end to disparity in services like road access, health services, educational services, communications and electricity from LLG to LLG in his district. And he wants this sustained as perpetually as possible.

For too long, he says, the people in or nearest to Wau and Bulolo, have had easy access to Government and other services and service providers, while the rest in Mumeng, Watut, Wau Rural, Buang and Waria access to services diminishes the further they are.

Shortly after he was declared Member for Bulolo, he swung into action. Some un-used K420, 000 in the Bulolo District Treasury Account was re-scoped to establish what in effect is a district works unit with three teams.

The legal framework for this was established based on a submission he presented successfully to the Tutumang – the Morobe Provincial Assembly.

For road works, two teams were established – one to cut and grade new roads and the other with a welding and construction team to follow through with the nut and bolts of roads construction. Another unit was established to erect buildings where they are required.

Opening up the Middle Watut road was one of the road’s team’s tasks. It yielded results that Mr Basil had envisioned – but was still ecstatic pleased about.

“We opened up the road and coffee bags and alluvial gold came out. In less than six months, three brand new PMV trucks were bought to provide services – carriage of passengers and their goods,” he said, adding the people are helping themselves now.” They just needed road access restored.”

At new Mumeng, he has combined with Niugini Table Birds to put up a tower for rural radio telephone services as well as television receptor – a move he has repeated in Buang and wants to expand to all LLGs.

He knows that the people can’t be left waiting for vital health services. Early on, he purchased an ambulance and sent out a health team whose task is to do the rounds in each LLG doing preliminary diagnosis of the sick, immunising children and bring the seriously sick out for further medical attention. This team also brings in medical supplies and takes the sick to health centres in Bulolo and Wau or even all the way to in Lae.

Mr Basil is a realist. Crime is here to stay and Bulolo and Wau and the district as a whole are not exempted. As a reserve police officer and owner/operator of Armsec Security Services, he knows the importance of police presence. Immediately, he wants to see each of the LLG’s have one or two policemen with a vehicle, arms and radio communication and a stand by mobile squad.

Last month, he decided he wanted to have a Bulolo Five-Year District Plan bringing together district leaders in various sectors as well as Morobe Provincial Administration and members of the private sector.

He told administration staff that he did not want a “cut and paste” job from other plans. He already knew what his district needed, and work had already begun in some of these areas. What he wanted, he told them, was to capture what he was going, incorporate what the private sector were doing or can do, and to identify and document ways to fund the larger projects.

“I want the Bulolo District Five-Year Development Plan to incorporate the fact that I want to see equal access to services, participation in income earning opportunities– and benefit from projects within the public sector and private sector for all my people,” he said.

Mr Basil is too astute to shoot his golden gooses – Bulolo and Wau. In fact, during the one-week of consultations on the Plan, he gave the mayor of the towns, two dump trucks with instructions to start raising their own revenue.

His love for internet/email communications showed on that day with purchase of full computer sets aimed at ensuring that there is direct communication between his office, the district and provincial administration, as well as all the LLGs in his district.